Gordon Jackson reports that the Port of Brunswick continues to set new records. Breakbulk tonnage experienced strong growth this past fiscal year, up 15.7% to more than three million tons. 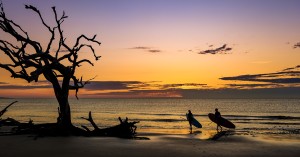 Georgia’s Golden Isles among the best

Kenna Simmons reports, it’s not exactly news to Georgians, who know that paradise can be found just off the coast on the state’s barrier islands. But the rest of the world has caught on, as the Golden Isles — Jekyll Island, Little St. Simons Island, Sea Island and St. Simons Island – are among the best in the U.S. according to Travel + Leisure magazine’s 2022 readers survey.

Zachary Hansen reports that Gov. Brian Kemp on Wednesday morning was visiting the tallest building constructed in Atlanta since the Great Recession to see Google’s expansion for himself. The Republican, currently running a heated reelection campaign, was also there to take credit for the state’s growing status as a national technology hub, with several companies making large investments in Midtown over the past few years.

Riley Bunch reports that Marty Daniel, the CEO of a Georgia gun manufacturer, testified in front of Congress of Wednesday, as part of an ongoing investigation by lawmakers into what is fueling the country’s high rates of gun violence. Daniel asserted that the gun industry is not responsible for the country’s mass shooting epidemic.

Josephine Johnson reports that like many during 2020 and its months of uncertainty, author and naturalist Cathy Sakas hunkered down and honed her creative work. Isolation inspired a new book, and when she emerged from the shutdown and intermittent closures and re-openings, she wasn’t alone.

Karen Kirkpatrick reports on Mike Raymer, Executive Director of the Georgia Council on Economic Education, who stresses the importance of teaching economics and personal finance to elementary, middle and high school students.

Dave Williams reports that the risk of a fire on Cumberland Island from a launch failure at a proposed commercial spaceport in Camden County is “so low as to not be credible,” according to a new study. ARCTOS, an engineering consultant with more than 60 years of experience in launch and reentry risk analysis, found only two scenarios in which a failed launch could result in a fire on Cumberland: a low-altitude breakup resulting in a fireball or debris hot enough to cause a fire.

Patricia Murphy, Greg Bluestein and Tia Mitchell report that the newest AJC poll of the 2022 elections shows a possible split-ticket dynamic in Georgia this year, with GOP incumbent Gov. Brian Kemp about five points ahead of Stacey Abrams in the race for governor, and Democratic incumbent U.S. Sen. Raphael Warnock with a three-point lead over Herschel Walker, which is described by pollsters as essentially a dead heat.