Katie Nussbaum reports over the last 12 years, Kia Motors Manufacturing Georgia has become an important cog in the Georgia Ports Authority machine having shipped more than 350,000 twenty-foot equivalent container units (TEUs) through Savannah. The activity has earned Kia a spot as one of the GPA’s top-five importers. 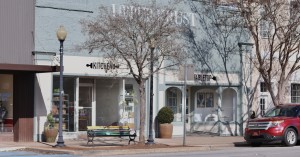 Thomaston is a TV star

Kenna Simmons reports that Thomaston is ready for its closeup. On Sunday, May 22, the small town in Upson County will be the star of HGTV’s Home Town Kickstart presented by People magazine.

Michael E. Kanell reports that several months of increased mortgage rates may be pushing some people out of the housing market, but the balance between buyers and sellers hasn’t changed enough yet to cool the rapid rise in prices in metro Atlanta, according to several reports. Home prices also climbed despite a dip in sales in April as the inventory of available homes remained low across the metro area.

Trevor Williams reports that an investment and trade conference linking up six states in the Southeast and six provinces in Canada is returning to Savannah this June, 14 years after holding its first official event in the coastal Georgia city. A hallmark of the program each year is the intentional focus on helping small and medium-sized companies navigate the cross-border procurement process, selling both to government agencies and to the massive companies that make themselves available for meetings.

Becky Purser reports, on the heels of reporting a $12.1 million loss in its fiscal second quarter, Blue Bird Corporation laid off 115 production workers at its Fort Valley manufacturing facility. The school bus manufacturer attributed Tuesday’s “limited workforce reduction” to continued “supply chain disruptions that have been exacerbated by Russia’s war in Ukraine and the lingering COVID-19 pandemic,” according to a company statement.

Maria Saporta reports that Atlanta-based Tull Charitable Foundation wanted to do something special to celebrate its 70th anniversary. So, the Tull Foundation made a $700,000 gift to Achieve Atlanta, a nonprofit that supports students from Atlanta Public Schools (APS) to successful complete their post-secondary educational goals through needs-based scholarships.

Staff reports that the Board of Regents of the University System of Georgia named Mike Hobbs as president of Georgia Highlands College, effective July 1. Hobbs currently serves as vice president for student affairs and athletic director at Jefferson State Community College in Birmingham, Alabama.

Emil Moffat reports that voters in the city of Atlanta will be asked to approve a $750 million infrastructure spending package next Tuesday that includes $15 million for the arts. Walking through the ZuCot Gallery in the Castleberry Hill district Wednesday, Mayor Andre Dickens says a vibrant arts scene has the power to transform communities.

The female perspective: What women lawmakers bring to the Georgia General Assembly

Staff reports that Governor hopeful David Perdue has additional support as Sarah Palin endorsed him for Governor of Georgia on Wednesday. Palin, former governor of Alaska will join Perdue at a press conference in Savannah on Friday, May 20.

Patricia Murphy, Greg Bluestein and Tia Mitchell report, it was primary night in five states across the country Tuesday, as the big question on the table in Georgia played out elsewhere– is a Trump endorsement enough to win in a GOP primary, even if the candidate is a new resident, bad apple, or election denier? The answer last night was maybe, no and yes.