Collin Kelley reports that the Shepherd Center has received a $50 million capital grant from the Arthur M. Blank Family Foundation to support construction of a new family housing building at its Peachtree Road campus. The building, which will be named after Blank, will add 160 housing units enabling more families and caregivers to be close by as their loved ones participate in rehabilitation for spinal cord injuries, brain injuries, multiple sclerosis, and other neurological conditions. 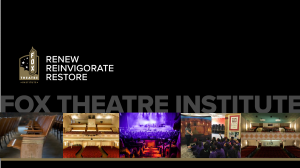 Julia Roberts writes, remember the excitement of going to your hometown’s first movie theatre or seeing your first live performance on a stage? Or maybe you were a performer in one of the many high school theatres in the state. Either way, you’ve benefited from the presence of the performing arts.

Scott Trubey reports that Southern Company on Thursday said its profits dipped slightly in the first quarter of this year on higher operating costs, but the energy giant’s revenues soared on higher prices of natural gas. The Atlanta-based power and gas company, which owns Georgia Power, reported profits of $1.03 billion in the first three months of this year compared to $1.14 billion in the quarter a year ago.

Staff reports that Georgia Highlands College (GHC) has been named an Aspen Prize Semifinalist by the Aspen Institute College Excellence Program. GHC is one of 25 colleges across the country eligible to compete for a $1 million prize recognizing excellence in equitable outcomes for students in and after college.

Emily Kenworthy reports that University of Georgia Marine Extension and Georgia Sea Grant are cleaning up the Georgia coast and supporting shrimpers whose income was limited during the pandemic. Through Trawl to Trash, funded by the National Sea Grant College Program, commercial shrimpers are recruited to sew bags made of recycled shrimp nets that can be used to collect marine debris.

Loran Smith writes, the business of winning championships can bring either a drought or an embarrassment of riches. There are some schools that have never won a single national title and then there are Alabama and Notre Dame, which claim a dozen or more.

Chart Riggall reports that after facing a series of legal challenges to their constitutionality, Cobb’s three upcoming cityhood referendums will proceed after all. Votes on East Cobb, Lost Mountain, and Vinings will move forward as planned on May 24. Cobb Superior Court Chief Judge Robert Leonard decided the court would not intervene to block the referendums, instead planning to revisit the three lawsuits challenging the efforts after the cities’ fates have been decided at the ballot box.

Stephen Fowler reports that a left-leaning political action committee is asking the Department of Justice to investigate whether Trump-backed Senate candidate Herschel Walker broke federal law by failing to properly file his personal financial disclosures. End Citizens United sent a letter Thursday to the Public Integrity Section of the DOJ arguing Walker could be running afoul of the Ethics in Government Act of 1978 by leaving off sources that paid him more than $5,000 and a full list of positions he holds in companies.

A Georgia City Reckons With a New District, Led by Marjorie Taylor Greene

Maya King reports that less than a 30-minute drive from Atlanta, Powder Springs embodies the changes reshaping Georgia politics. Shops and restaurants owned almost entirely by Black proprietors line its downtown center and are frequented by a growing population of young and racially diverse residents.

Asia Ashley reports that several highly contested education bills from the 2022 legislative session were signed into law by Gov. Brian Kemp Thursday morning. Among the most debated bills are ones that prevent teaching of certain race-related topics labeled by Republicans as “divisive concepts” and transgender sports; remove books containing content deemed to be harmful out of libraries and schools; and allow parents to intervene in their child’s instruction.

Dave Williams reports that a federal judge ruled Thursday that Gov. Brian Kemp may not raise additional funds for his reelection bid from a leadership committee until the Republican gubernatorial nomination is decided. Legislation the Republican-controlled General Assembly passed last year established eight leadership committees to be chaired by Georgia’s governor, lieutenant governor, the general-election nominees opposing those two statewide incumbents and the heads of the majority and minority caucuses of the state House of Representatives and Senate.

Patricia Murphy, Greg Bluestein and tia Mitchell report that U.S. Rep. Drew Ferguson is the highest-ranking Georgia lawmaker in the House Republican Conference, serving as the chief deputy to GOP Whip Steve Scalise. That gives Ferguson a role in corralling and counting members ahead of votes.