Hannah E. Jones reports, between leisurely hikes, runs with your dog and, of course, shooting the ‘Hooch, it’s hard to be bored near the Chattahoochee River. Now, after about six years in the works, the Chattahoochee River National Recreation Area (NRA) — the 22nd-most-visited national park in 2021 — is finalizing its first-ever Comprehensive Trails Management Plan. 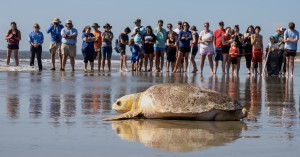 Celebrating loggerheads’ return to the sea

Mary Ann DeMuth reports, just ahead of nesting season, which begins in May, staff members from the Georgia Sea Turtle Center on Jekyll Island released two rehabilitated sea turtles at Great Dunes Beach. About 500 people, including three busloads of students, witnessed the return of the two 30-plus-year-old female loggerheads to the ocean.

Rodney Ho reports, on his second full business day at the helm of the combined Warner Bros. Discovery, CEO David Zaslav with new CNN President Chris Licht huddled with Ted Turner in Washington, D.C., then flew to Atlanta to meet employees at the Midtown campus of what used to be known as Turner Broadcasting. There, Zaslav took selfies, toured the facilities and gave a pep talk to staff in nearly the same spot where the intrepid Turner introduced the 24/7 news operation CNN to the world more than 42 years earlier.

Kenna Simmons reports, Greg Bluestein may be the hardest working man in Georgia media. You’ll see his byline in the AJC – from the front page to the Morning Jolt newsletter and Political Insider blog – hear his voice as host of the Politically Georgia podcast and as a regular on GPB’s Political Rewind radio program, and watch him on MSNBC and NBC News where he’s a contributor.

T.A. DeFeo reports that Georgia officials have lauded the decisions of companies to either relocate their headquarters or expand their operations in Georgia. Whether the state of Georgia offered tax incentives to those companies is a closely-guarded secret, and taxpayers will not know until the state says the project is complete and no longer “in progress.”

Asia Ashley reports, in less than two weeks, Georgia begins an election year that will likely spotlight it as one of several battleground states in the country. Early voting starts May 2 for the May 24 General Election Primary, which has many candidates seeking several top seats across the state. From the governor’s office, lieutenant governor and secretary of state, voters have plenty of choices.

Georgia to require investigations into deaths of pregnant, postpartum women

Ambria Burton reports that Georgia lawmakers approved a requirement for medical examiners to investigate the cause of death of a pregnant woman or a woman who dies within one year of giving birth. The law will go into effect July 1, unless vetoed by Gov. Brian Kemp.

Ross Williams reports that Congresswoman Marjorie Taylor Greene took the stand Friday in an at-times raucous court hearing that incorporated a history lesson on the Whiskey rebellion and a stirring speech from a president fighting off an extraterrestrial invasion. Greene was in the hot seat because a group of voters say she should not be allowed to run for re-election because they say she helped plan the Jan. 6 Capitol riots.

Dave Williams reports advocates for Georgia’s dead-in-the-water medical marijuana program hope a new initiative will finally start providing cannabis oil to patients more than three years after the General Assembly legalized the industry. Gov. Brian Kemp announced last Tuesday that he was appointing Sid Johnson, a former commissioner at the Georgia Department of Administrative Services (DOAS), board chairman of the state commission that oversees the program.

The Jolt: Takeaways from the brawl between Brian Kemp and David Perdue

Patricia Murphy, Greg Bluestein and Tia Mitchell report, it was less a debate and more of a barroom brawl. But we still learned plenty from the first Republican showdown between Gov. Brian Kemp and former U.S. Sen. David Perdue in their first debate on Channel 2 Action News.