Nyamekye Daniel reports that Georgia farmers already weathering crop shortages from a deep freeze during the spring could face another challenge this harvest season, according to the Georgia Farm Bureau. More than 10,000 John Deere workers are on strike at 14 plants across the nation, including in Grovetown, near Augusta. 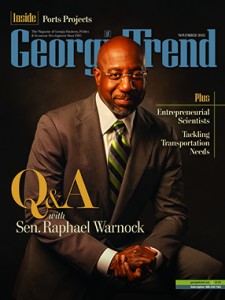 Kelly Yamanouchi reports, just after midnight on September 26, the fire department and fuel farm manager at Hartsfield-Jackson International Airport rushed to an emergency on the ramp outside of Gate C-14. Due to a broken piece of equipment, jet fuel was gushing out onto the ground, and workers were hurrying to try to stop its spread.

Trevor Williams reports that the government of France has awarded its second highest honor to Vanessa Ibarra, a longtime supporter of French engagement with Atlanta serving as director of the Mayor’s Office of International Affairs since 2018. Ms. Ibarra received the recognition — the National Order of Merit with the rank of knight — during a Monday celebration at the French Consul General Vincent Hommeril’s residence.

Katie Nussbaum reports that after more than five years, Spaceport Camden could soon get the greenlight from the Federal Aviation Administration (FAA) through a license to operate a commercial spaceport, but it wouldn’t be the Camden County’s first foray into the aerospace industry. The spaceport would be located on a now defunct industrial site, which was home to the Thiokol Chemical Corp. in the 1960s.

Staff reports that ranchers and farmers seeking to improve financial and production records are encouraged to tune in to a free ZOOM webinar hosted by Fort Valley State University’s Cooperative Extension Program on Nov. 9. From noon-1:30 p.m., “Record Keeping with Production Decisions” will be simulcast on Facebook live (facebook.com/pg/FVSUCAFST/videos).

Mary Ann DeMuth reports that cybersecurity attacks are real and occurring everyday – at major corporations, health systems, small businesses and even on our personal computing devices. At the same time, the world is facing a massive shortage of cybersecurity specialists.

Joe Adgie reports that the Newnan City Council approved a measure on Tuesday that, effectively, accepted the first tranche, or portion, of American Rescue Plan Act funds. The council voted 5-1, with Paul Guillaume voting against accepting the first tranche of funds, valued at $7.7 million.

Georgia US senators one step closer to Medicaid win

Riley Bunch reports that Georgia’s two Democratic U.S. senators celebrated a small victory after President Joe Biden unveiled a $1.75 trillion spending bill that includes a key provision the Peach state lawmakers lobbied for. The president’s “Build Back Better Framework” that dedicates billions to social services and climate investments also includes a Medicaid expansion provision that creates a pathway to coverage for residents in states that have refused to fully expand.

Two maps, two visions: Georgia’s balance of power for next decade hangs in the balance

Tim Darnell reports that Democrats and Republicans will converge at the state Capitol Nov. 3 to begin redrawing Georgia’s congressional districts, a once-a-decade exercise to accommodate population shifts reflected in the U.S. Census. Both parties are offering vastly different visions for how Georgia should be represented in Congress, with Republicans seeking to maintain their majority in the Peach State’s 14-member U.S. House delegation and Democrats looking to even things up.

Patricia Murphy, Greg Bluestein and Tia Mitchell report that the special redistricting session of the Georgia General Assembly kicks off at 10 a.m. Wednesday when House Speaker David Ralston and Lt. Go. Geoff Duncan gavel in members for the first time since April. Duncan, who is not seeking reelection, will preside over the state Senate session, as usual, and could play an especially fascinating role in the process this month as one of the few members in the Capitol who doesn’t have a dog in that fight.