Staff reports that Gov. Brian Kemp announced recently that AEV (Atlanta Esports Ventures), a partnership between Cox Enterprises and Nevada-based Province Inc., will locate the headquarters for Atlanta Reign, a professional eSports team, in Atlanta. The facility in Midtown Atlanta will result in the creation of 45 new jobs and an investment of $100 million in the growing eSports ecosystem in Atlanta. 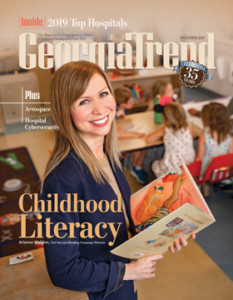 Susan Percy reports, the first thing to know about early literacy is that it is critically important; the next, that it connects to a whole lot of other conditions and challenges. But the best thing to know is that there are solutions to the problem of poor reading skills and some smart people working toward them. They could use your help.

Meris Lutz reports that the fall of 2013 should have been a blessing for Georgia shrimpers. A bacterial infection had wiped out the Asian shrimp farms that drove many Americans out of business.

David Allison reports that Atlanta’s Makeswift Inc., which claims to be “the fastest drag-and-drop landing page builder on the Internet,” has raised $1.5 million, according to a Nov. 27 filing with the Securities and Exchange Commission. Makeswift, formerly known as Landing Lion, joined the startup incubator Advanced Technology Development Center (ATDC) at Georgia Tech last year.

Wes Wolfe reports that the arrival of an 18-year-old North Atlantic right whale off the Northeast Florida shore during the past week kicked off hopes for a successful calving season, and a successful season is desperately needed following some of the lowest seasons on record, continuing deaths from fishing entanglements and problems caused by warming seas in traditional feeding areas off New England and the Canadian maritime provinces.

Diane Wagner reports that Federal funds could be available next year to address the mental health needs of very young children, but a House study committee found state Medicaid policies don’t cover assessments. “We’ve got to find a way to pull our agencies together, certainly through conversations with our governor and other state agency heads … There is a desire to make this happen,” said Rep. Katie Dempsey.

Gun rights get hearing this week at Supreme Court

Robin Bravender reports that a momentous clash over gun rights is headed to the U.S. Supreme Court. The high court is slated to hear oral arguments on Monday in a case over a New York City handgun regulation.

David Pendered reports that when Sen. Johnny Isakson announced he was co-sponsoring federal legislation to provide $50 million, over 10 years, to help conserve endangered right whales, he cited an event during his days the Georgia Legislature in explaining why he picked support of this issue as one of his final acts in public office.

Staff reports that education has long been considered the path to professional and financial success. It’s true that higher levels of education correspond with lower unemployment and higher earnings. But, a combination of sharp tuition increases and comparatively slow wage growth has created an environment in which many U.S. college graduates struggle to pay off their debt.

Greg Bluestein reports that an “acid-washed jean shorts” wearing Floridian with “Stacey Abrams syndrome.” An “oddly submissive” outsider telling Georgians what to do. A “cowardly” interloper who stuffs Pokémon cards in his pockets and “can’t cut it in south Georgia.” Facing shots over his planned pick for an open U.S. Senate seat, Gov. Brian Kemp’s inner circle unleashed a special type of vitriol against U.S. Rep. Matt Gaetz of Florida after he blasted the governor’s plans to select financial executive Kelly Loeffler.