Sam Whitehead reports that Gov. Brian Kemp has released his long-awaited plan he says will lower costs and increase options for people who buy health coverage on the individual insurance marketplace. Kemp will ask the Trump administration for permission to set up a reinsurance program that uses hundreds of millions of state and federal dollars to help insurance companies cover high-cost claims. 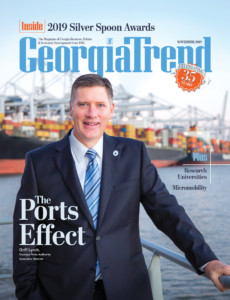 Mary Ann DeMuth reports that in spite of global economic and trade uncertainties, the news from the Georgia ports remains upbeat. “Excited” is the word Georgia Ports Authority (GPA) Executive Director Griff Lynch frequently uses to describe his attitude about the ports’ progress.

Kelly Yamanouchi reports that Atlanta City Council members voted to hold off on approving a contract for janitorial services at Hartsfield-Jackson International Airport, saying they wanted more information on how much workers are paid at the airport. The vote came after labor union representatives said janitorial workers, who labor under a different contract for cleaning of the terminal, raised concerns about pay.

Here’s how Columbus-based Aflac, Global Payments (TSYS) and Synovus did in Q3

Nick Wooten reports that Aflac, Synovus and Global Payments — a new company formed by the merger of Global Payments and TSYS — all announced their third-quarter financial results in the past few weeks. How did the Columbus-affiliated companies fare? It’s been a busy few months. TSYS completed its merger with Global Payments. Japan Post’s improper sales cases might affect Aflac’s profitability.

Doug Walker reports that Lewis Chemical Co. is in the process of being sold to its employees through an employee stock-ownership program. The company makes surfactants that are used in a variety of industrial and commercial applications.

Curt Yeomans reports that while part of south central Georgia has moved out of drought conditions due to recent rains from the remnants of Tropical Storm Olga, some parts of metro Atlanta were not so fortunate, according to the U.S. Drought Monitor’s latest update. Parts of metro Atlanta, including portions of Gwinnett, continue to experience “extreme” drought conditions despite rains that fell in the area, according to the U.S. Drought Monitor.

Bill Hobbs reports, after nearly 11 hours of exhaustive discussions over issues related to Service Delivery Strategy (SDS) between members of Milledgeville City Council and the Baldwin County Board of Commissioners on Wednesday, officials adjourned. They admit some progress was made, but there still are a number of major issues yet to be resolved before a new SDS agreement can be reached.

Making their mark on Georgia

Mary Ann DeMuth reports that for 23 years, Georgia Trend has recognized 40 of the best and brightest professionals under the age of 40 who are helping transform business, education, politics, science and the arts throughout the state. This year’s honorees were celebrated at a joyful and inspirational 40 Under 40 event at the Georgia Aquarium as their families, friends and colleagues applauded them.

Jill Nolin reports that environmentalists and consumer advocates will have another chance to persuade a Fulton County judge that a review should happen now – instead of years from now – of state regulators’ decision to allow the expansion of Plant Vogtle to continue. The state Court of Appeals issued a decision this week that sends a case stemming from a key 2017 state Public Service Commission vote back down to Judge Shawn Ellen LaGrua, who tossed out the case without looking at whether the vote was properly handled.

Andy Miller reports that just one of Gov. Brian Kemp’s waiver proposals was unveiled Thursday. But that one part, announced at the state Capitol, is still a lot to grasp. The so-called 1332 waiver proposal is designed to make fundamental changes in the health insurance system for individuals and families in the state.

Robin McDonald reports that the Supreme Court of Georgia has unanimously affirmed the dismissal of a challenge to Lt. Gov. Geoff Duncan’s election stemming from statistical anomalies in the 2018 election’s electronic voting tallies. In a 94-page opinion authored by Justice Sarah Warren, the high court ruled Thursday that evidence presented at the January trial of an election challenge by Georgia voters and a nonprofit election integrity organization failed to demonstrate that the results of the 2018  contest between Duncan, a Republican, and Democratic opponent Sara Riggs Amico should be invalidated.