Daniel Evans reports that Chris Clark, president and CEO of the Georgia Chamber of Commerce, spoke at Tuesday’s Early Bird Breakfast and gave a glimpse at Georgia’s future, which is rapidly changing. Clark spoke mainly on the challenges that employers will face as the world becomes more tech-dependent and millennials and gen-z workers make up a large portion of the workforce. 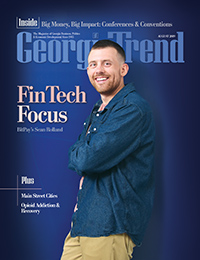 Lori Johnston reports that an image on a massive video screen inside the Georgia Cyber Center offers an invitation: “Join Us in Building the Future.” The phrase, displayed in one of two new downtown Augusta buildings designed to promote connectivity among government, military, industry and academia, could be a new slogan for Georgia’s second-oldest city.

Helena Oliviero reports that the nation’s dominant tobacco company, maker of the top-selling Marlboro cigarette, is trying to become the next e-cigarette giant. And Atlanta is ground zero in the high-stakes experiment.

Novelis is setting up an innovation hub at Georgia Tech

Jessica Saunders reports that Novelis Inc. is setting up an innovation hub at Georgia Tech. The Atlanta-based maker of aluminum sheet products is investing $2.5 million to establish the Novelis Innovation Hub at the research university located in Midtown.

Katie Nussbaum reports, if you want to dine at one of the world’s best restaurants, you don’t have to travel very far. The Grey at 109 Martin Luther King Jr. Blvd. has earned a spot on Food & Wine and Travel + Leisure’s inaugural World’s Best Restaurants list, which was released Tuesday morning. The list, which is unranked and includes 30 establishments from around the world, was curated by writer Besha Rodell, Food & Wine editor Hunter Lewis, Travel + Leisure editor Jacqueline Gifford, a panel of 22 culinary personalities and one anonymous critic.

Staff reports that just northwest of Atlanta, Cherokee County boasts a well-educated population. More than 90 percent of its residents 25 and older graduated from high school. More than a third have a bachelor’s degree or higher. Yet 78 percent of the employed residents commute outside Cherokee County—some as far as Hall and Clayton counties.

How one Mercer Pharmacist is improving health care in rural Georgia

Kay Torrance reports that Nikki Adams Bryant, PHARMD ’03, is changing rural health care in Georgia. She owns Adams Family Pharmacy, the only pharmacy in rural Webster County in southwest Georgia, and recently opened Preston Family Medicine next door. Webster had been without a prescribing health care provider for many years.

Kelsey Richardson reports that the University of North Georgia contributed more than $667 million to Northeast Georgia’s economy during fiscal year 2018. Data from the annual study of the University System of Georgia’s economic impact was released on Tuesday, Aug. 20. It reported an increase of around $47 million compared to the previous year.

Taylor Denman reports that a study released by the University System of Georgia that measures the economic impact of affiliated colleges and universities said that Georgia Gwinnett College contributed more than $515 million to the local economy during the 2018 fiscal year. The economic impact is roughly at $51 million increase from last year.

Mary Ann DeMuth reports, for the sixth year, hundreds of attendees and exhibitors are descending on the Augusta Marriott Hotel at the Convention Center this week for the annual TechNet Conference. Running through Friday, the conference unites representatives from the U.S. military, academia and the cyber and tech industries for education and networking about the cyber threats the country faces.

Roxanne Scott reports that city of Atlanta plans to enter an agreement with Smyrna and Cobb County to conduct air testing near the Sterigenics plant after concerns of toxic gas emissions. The plant, which sterilizes medical equipment, is located less than a mile away from Atlanta.

Andy Miller reports that Georgia is still failing to meet key parts of its agreement with the U.S. Justice Department on caring for people with mental illness and developmental disabilities, according to an independent reviewer’s report released this week. The reviewer, Elizabeth Jones, cited “preventable deaths occurring in the state system, often the product of confirmed neglect.’

Jim Galloway, Greg Bluestein and Tamar Hallerman report that the nation’s economy is hitting on all eight cylinders, President Donald Trump insisted this morning – again. And yet the effects of his trade war with China linger.