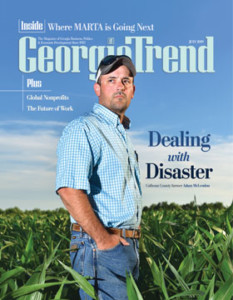 Mary Ann DeMuth reports that for many Georgians, last October’s Hurricane Michael is a distant memory. But nine months later, farmers in the state’s southwest region are still grappling with the swath of destruction the storm left in its wake. It was the first major hurricane to hit Georgia since the 1890s. With winds as high as 115 mph, Michael caused $2.5 billion in damage to the agriculture industry.

Gas prices up as Georgians hit the road for the holiday

David Wickert reports that gas prices are up in Georgia and across the country as Americans prepare to hit the road for the Independence Day holiday. The average price for regular unleaded in Georgia is $2.54 a gallon — 10 cents more than last week — AAA said Monday.

Douglas Sams reports that a massive development could bring 18 million square feet of warehouse space to Butts County, Ga. Developers are pitching the project on more than 1,400 acres at Interstate 75 and Highway 16 about 45 minutes south of Atlanta.

Trevor Williams reports that the official charged with promoting London globally as a financial services center sees Atlanta as a potential node in a network of cities sharing strategies to capitalize on “wave of innovation” disrupting the sector. Peter Estlin, elected for the one-year term as lord mayor of the City of London — the financial district of the broader global metropolis — sees the future of what might be the world’s richest square mile focused on adapting to change rather than holding onto its 20th-century advantages.

Mary Landers reports that black gill showed up early this year in Georgia’s shrimp. The evidence came from a first trawl of a day-long research cruise out of Skidaway Institute of Oceanography on June 21.

Georgia on track to operate own coal ash program

Wes Wolfe reports that moves are underway to allow the state to run its own coal ash regulatory program, separate from the federal government. The federal Environmental Protection Agency recently announced Georgia is the second state to take advantage of the new regulatory framework put into place by the 2016 Water Infrastructure Improvements for the Nation Act.

Taylor Denman reports, imagine showing up on your first day of work at a new job and being greeted by to a welcome party of 250 people. That’s what happened to Georgia Gwinnett College’s new president, Jann Joseph. Joseph recently served as interim chancellor at Indiana University South Bend.

Anisah Muhammad reports that honey bee colonies across the United States, including Georgia, have been in decline since the mid 2000s. However, more bee colonies died this winter than in any other year in the previous decade, according to a new study done by Bee Informed Partnership with Auburn University and University of Maryland.

Mary Ann DeMuth reports, in Georgia and around the nation and the world, food insecurity is a growing problem. Feeding America, a U.S. hunger relief organization, estimates more than 1.5 million people are struggling with hunger in our state alone and over 500,000 of them are children. This translates to 1 in 7 people in Georgia communities who don’t have enough to eat.

Martha Dalton reports that Monday, July 1 is the start of the 2020 fiscal year. That means many Georgia teachers, school psychologists, counselors and other staff members will soon see a bump in their paychecks. However, some of them might not receive the $3,000 promised by Gov. Brian Kemp. There are a few reasons for that.

Tamar Hallerman and Greg Bluestein report, in case it wasn’t already obvious that the wide-open 7th District congressional race would be a blockbuster, take a peek at some of the spring fundraising numbers. Republican Lynne Homrich, a former Home Depot executive and political newcomer, plans to announce she raised $500,000 during her first two months on the trail.