David Pendered reports that the economic development team from Savannah is in Atlanta Wednesday to trumpet the region’s opportunities in addition to tourism and import/export through the Port of Savannah. The success of tourism and the seaport makes their job a challenge. 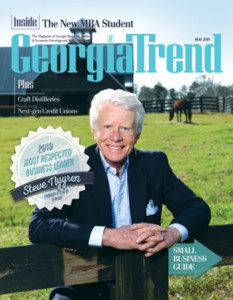 Susan Percy reports that after a successful career as a restaurateur, Steve Nygren retired to the country and found a new purpose. Serenbe, the lush green community Steve Nygren and his wife, Marie, have created in the hill country of South Fulton County, has been called a wellness sanctuary, an environmental prototype, an agrihood, even a utopia.

Michael E. Kanell reports that Atlanta home price increases are slowing, but other big cities are hitting the brakes harder, according to a much-watched monthly survey. Metro Atlanta home prices rose 4.7% in February from a year earlier, the fourth-fastest rise among the nation’s largest 20 metropolitan areas, according to S&P CoreLogic Case-Shiller.

Jessica Saunders reports that the parent company of Philip Morris plans to test market a new tobacco product in Atlanta, including the first U.S. IQOS retail store at Lenox Square. The U.S. Food and Drug Administration announced April 30 it has authorized the marketing of new tobacco products manufactured by Philip Morris Products S.A. for the IQOS “Tobacco Heating System.”

Staff reports that students seeking careers in the hospitality industry aren’t just learning concepts in the classroom, but they are also prepared for the industry through hands-on experiences at Georgia Southern University. The Hospitality Management program in the Parker College of Business prepares students for entry-level management positions in the restaurant and lodging industries while focusing on industry operations.

Trevor Williams reports that last year, Delta Air Lines Inc. announced that it would restart flights between the U.S. and Mumbai, India, but left up in the air whether New York or its hometown hub in Atlanta would win the connection again.  The wait ended Tuesday as Delta announced that the route would take off from New York’s John F. Kennedy International Airport, linking the financial centers of the world’s two largest democracies starting Dec. 22.

Tom Corwin reports that Augusta leaders could be getting more ammunition in the fight to save New Savannah Bluff Lock and Dam after an Augusta Commission committee on Tuesday approved $100,000 more for experts. Augusta Utilities Director Tom Wiedmeier had requested the additional money in part because the two expert firms hired by the city had already exceeded the $45,000 Augusta and North Augusta allocated for them by more than $36,000 in the furious run-up to get the cities’ lengthy comment about its objections to a plan proposed by the U.S. Army Corps of Engineers by the deadline.

Samantha Max reports that when Britney Asbell was first diagnosed with postpartum depression and anxiety after the birth of her second child, she felt isolated and misunderstood. Asbell couldn’t find a single therapist or psychiatrist near her home in Kathleen who specialized in maternal mental health. Her story is not unique.

Andy Miller reports that Anthem Blue Cross and Blue Shield, Ambetter of Peach State, and Humana had high levels of consumer complaints last year that the state determined to be justified, according to newly released figures. Georgia Insurance Commissioner Jim Beck and his staff recently posted complaint data for all health insurers in 2018.

Ellen Eldridge, Virginia Prescott and Amy Kiley report that a recent study by the American Lung Association shows the air along Georgia’s coast and in the mountains is clean and unpolluted. But in the metro Atlanta area, residents should be wary of what they’re breathing in. National Senior Vice President of Public Policy Paul Billings spoke with On Second Thought about what it means that five metro Atlanta counties received failing grades on air quality while the cities of Augusta and Savannah earned A’s.

Wes Wolfe reports that there are 55 national heritage areas in the United States, including the Gullah Geechee Cultural Heritage Corridor, which runs through Coastal Georgia. A U.S. House subcommittee met Tuesday to hear about the possibility of bringing those entities under one structure, and whether the federal government should stop funding them.

Greg Bluestein reports that State Rep. Brenda Lopez Romero entered the race Wednesday for Georgia’s 7th District with a plan to win by leveraging the same sort of grassroots appeal that helped make her the first Latina elected to the state General Assembly. Lopez Romero said she planned to emerge from the crowded field by recruiting more first-time voters who often skip primaries.