Staff reports that a global producer of animal proteins has announced plans to build a broth factory in the Carbondale Business Park just south of Dalton that will create 80 jobs. Essentia Protein Solutions announced it will invest $100 million in the facility, which will be on 20 acres in the park, which hosts facilities for the GEDIA Automotive Group, Hanwha Qcells and XL Brands. 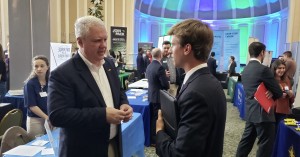 Patty Rasmussen reports, finding qualified workers is the number one challenge facing companies across sectors, but it can be doubly difficult for companies located in rural regions of the state. When every company is attempting to attract the most talented workers, how can smaller companies in dynamic industries like finance compete with their larger counterparts?

Zachary Hansen reports that a dozen new tenants will soon join an aquarium at the Mall at Stonecrest as the retail center attempts to rebrand itself as a family and entertainment destination. Developer Stonecrest Resorts is in the middle of a multi-phase plan to transform a shuttered Sears store at the mall in the south DeKalb County city. ≈

Staff reports that Elyse Davis, who has served as Georgia Power’s northwest region community development manager since 2014, was recently promoted to the statewide community development manager position. She will be responsible for leading activities associated with the expansion, location and retention of companies in Georgia as well as developing local community growth strategies and building relationships with a range of experts across the state.

Zach Dennis reports, as Wawa has become a favorite for our southern neighbors in Florida, on Wednesday, the beloved convenience store chain announced plans to expand into Georgia. The announcement added that the expansion will also include South Alabama.

Mike Stucka and Sean Lahman report that a typical Richmond County home listed for $221,225 in September, down from $221,250 a month earlier, an analysis of data from Realtor.com shows. The median list home price in September was up about 31.9% from September 2021.

Gordon Jackson reports that WorkSource Coastal has hosted job fairs in the Golden Isles for the hospitality industry and manufacturers. Now, the organization is seeking local businesses that could benefit from some additional help to hire and retain skilled workers.

Grant Blankenship reports that a federal department of education is granting $9.6 million to a partnership between five Georgia school systems and Mercer University’s Tift College of Education. The aim of the partnership is luring mid-career people to teaching.

T.A. DeFeo reports that Georgia Department of Transportation said it awarded seven projects valued at more than $104.7 million in August. However, the awards list the agency provided indicates that the state only awarded about $12.1 million in projects. A GDOT spokesman said officials deferred a pair of widening and reconstruction projects worth roughly $93 million and expect to award them later.

Dave Williams reports that Georgia will need to invest $103.7 million in air cargo improvements to meet the industry’s future needs, not including investments at Hartsfield-Jackson Atlanta International Airport, a new study has concluded. The vast majority of those improvements should occur at the airports serving Savannah and Albany, according to a report released Wednesday by the Georgia Department of Transportation.

The Jolt: Judge to hear abortion law challenge ahead of Election Day