Terry Richards reports that more than 130 jobs are coming to Lowndes County as a roofing materials company builds a factory in the Valdosta area. GAF Materials will invest $146 million over six years to build a new manufacturing plant in the Buster Bassford Industrial Park in Lowndes County, according to a statement from the governor’s office. 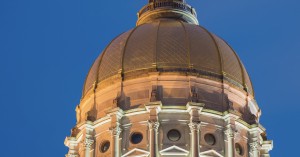 Kenna Simmons reports that as access to healthcare across the state continues to be uncertain for many in rural and underserved communities, schools are becoming places that can serve as healthcare safety nets for some of the most vulnerable Georgians – children. There are school-based programs that offer medical and wellness services, and behavioral and mental health services.

Kelly Yamanouchi reports that UPS is staffing up for the holiday shipping season by hiring more than 100,000 seasonal workers — a daunting challenge amid widespread labor shortages. In Atlanta, UPS plans to hire about 2,300 seasonal employees in preparation for its peak season.

John Druckenmiller and Blake Silvers report that Miller Ferry Technology Center, a massive complex with 1.56 million square feet under roof with a project cost of $160 million, is being proposed off U.S. 41 south of the new connector. A development of regional impact application shows almost 112 acres would be involved off Miller Ferry and Shaw roads in southern Gordon County.

Bob Pepalis reports that Sandy Springs approved spending $582,700 for designing a new cultural center building that is expected to house the Georgia Commission on the Holocaust (GCH), a police precinct, and Visit Sandy Springs offices. In session on Sept. 6  as the Public Facilities Authority, members of the Sandy Springs City Council directed Houser Walker Architecture to complete the project design for the building, which will replace the Bluestone building at 6110 Blue Stone Road.

Staff reports that the Annette Howell Turner Center for the Arts is in the running to bring a free outdoor music series to Valdosta starting in 2023. But it needs the community’s help. Supported by the Mortimer & Mimi Levitt Foundation, a social impact funder at the intersection of music and public spaces, Turner Center representatives said in a statement they hope to qualify as one of the top 20 finalists in the public voting phase of the Levitt AMP (Your City) Grant Awards.

Deron Davis stepping down as executive director of Nature Conservancy-Georgia

Dave Williams reports that the Georgia Department of Transportation (DOT) is trying to find homes for historic bridges that have outlived their usefulness and need to be replaced. The agency’s Office of Environmental Services announced Wednesday the launching of a website that will spread the word about historic bridges that are available for relocation and preservation.

Ross Williams reports that a bus with Herschel Walker’s face on it pulled into an Emerson sports complex Saturday, and out of it stepped Herschel Walker himself, making the first stop in a tour promoting his candidacy for the United States Senate. Walker, a University of Georgia football legend turned mixed martial arts fighter and rightwing favorite, said Georgians should send him to Washington instead of Democratic Sen. Raphael Warnock because Walker will help stem the tide of sissification he said is threatening the nation’s schools and military bases.

Abraham Kenmore reports that the 2022 Georgia gubernatorial race is a rerun of the 2018 elections for the major party candidates. Once more, Brian Kemp is facing off against Stacey Abrams.

Patricia Murphy, Greg Bluestein and Tia Mitchell report that dozens of bipartisan business executives signed an open letter that warns Georgia’s anti-abortion law and other Republican policies will risk the state’s pro-business reputation. The letter, released this morning, said the newly implemented restrictions that ban abortions as early as five weeks will force executives “to compete with other states on a whole different level, putting all Georgia firms at a disadvantage.”