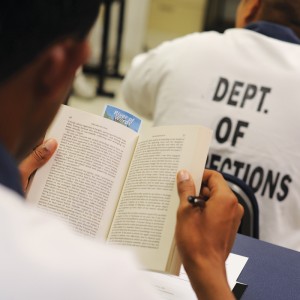 Candice Dyer reports that Georgia has one of the nation’s highest incarceration rates. In 2008, Sarah Higinbotham, a doctoral candidate at Georgia State University, wanted to teach a literature class inside a prison and was surprised to learn that no program of that kind existed.

Jake Busch reports that fragrance and flavor company Arylessence will add to its Marietta campus, the Cobb Chamber of Commerce announced Tuesday. The announcement came shortly after the Marietta-based company received a $27 million bond issue from the Development Authority of Cobb County.

Stanley Dunlap reports that the firm that wants to mine for heavy minerals near the Okefenokee Swamp scored a major victory Monday after a federal agency reversed its decision to take control of the review process away from Georgia’s environmental agency. A couple of months after the Twin Pines Minerals’ permitting process was redirected to get more input about the potential harm to historic burial grounds of the Muscogee Creek Nation tribe, the Georgia Environmental Protection Division will resume its review of the Alabama-based company’s application to mine a large swath of land on the edge of the national wildlife refuge.

Staff reports that First Bank of Dalton and First Bank of Calhoun have rebranded to Builtwell Bank effective Aug. 22 following the completion of a successful merger. “We are very excited to have this opportunity to take care of our customers and our communities at an even higher level,” said Builtwell Executive Mitch Sanford.

Stanley Dunlap reports that a group of residents and environmentalists are fighting to prevent the world’s largest wood pellet plant from coming to a predominantly Black and Hispanic community in south Georgia. The Southern Environmental Law Center and Concerned Citizens of Cook County are asking a judge to revoke an air quality permit for the planned Adel plant on the grounds that the state Environmental Protection Division did not take into consideration the serious health risks that the pollution would pose to those living closest to it.

Politics: Five local events over the next few weeks to draw top names on the state ballot.

John Druckenmiller reports that some of the biggest names on the November ballot are heading to Rome in the next few weeks. Spread across 18 days beginning Sunday and continuing through Sept. 14, top-of-the-ballot candidates are due in Rome/Floyd County, most at public assemblies.

Mary Landers reports, in the middle of a campaign swing through Coastal Georgia, Democratic candidate for governor Stacey Abrams stopped Saturday at Green Bridge Farm in fast-growing Effingham County. There, founder Michael Maddox showed off the vegetable gardens that help feed the 10 families that live in the 25-acre “agrihood,” where small houses and wooded lots are the norm.

Rebecca Grapevine reports that a juvenile court must reevaluate the sincerity of parents’ objections to their children’s vaccinations, the state Supreme Court ruled Tuesday.  At issue is whether children in temporary state custody can be immunized with routine childhood vaccines over their parents’ religious objections – and how to decide if those objections are sincere or not.

The Jolt: Georgia Republicans, attacked by Donald Trump, open to endorsing him anyway

Patricia Murphy, Greg Bluestein and Tia Mitchell report, when Donald Trump put Gov. Brian Kemp at the top of his revenge list in a failed bid to oust the governor in Georgia’s May primary, the first-term Republican resisted the urge to hit back. As November nears and a possible Trump comeback looms, Kemp and other GOP incumbents opposed by the former president are sticking to that familiar strategy.