Staff reports that a meeting set for Aug. 31 in Rome is expected to draw economic development directors from around Northwest Georgia to focus on coordinated long-term plans. They’ll be updating their shared Comprehensive Economic Development Strategy. 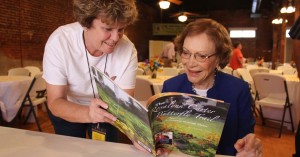 Mary Ann DeMuth reports that former First Lady Rosalynn Carter celebrated her 95th birthday on August 18 and three organizations teamed up to honor her birthday and her legacy of advocating to protect pollinator species like butterflies. The Georgia Public Library Service and the Georgia Farm Bureau partnered with the Rosalynn Carter Butterfly Trail nonprofit to plant and register 240 new pollinator-friendly butterfly gardens at libraries and in communities across the state.

Spencer Donovan reports, single-use plastics made from petrochemicals dominate packaging in the U.S. in part because of their low cost and convenience. But they’re polluting the planet and contributing to climate change.

Shortage of labor and materials complicates construction of affordable homes

Megan Fitzgerald reports that while the lack of affordable housing in Glynn County can be tied to many causes, contractors point to a shortage of construction labor and building materials. Both shortages cause construction timelines for homes to extend, as well as prices to increase.

Dyana Bagby reports that an Atlanta-based tech startup recently received $100,000 plus access to training and resources through a national program designed to assist Black entrepreneurs. Pruuvn (pronounced “proven”), a credentialing and data trust company co-founded by Bryan Hobbs and Marcus Shute, is one of five startups to be accepted into the Black Founder Accelerator program, an initiative of Milwaukee-based Northwestern Mutual and gener8tor.

T.A. DeFeo reports that roughly 18 months after a law requiring hospitals to post accurate prices online went into effect, roughly three-quarters of Georgia hospitals continue to hide the cost of care from consumers. That’s according to a new report from PatientRightsAdvocate.org.

Carlton Fletcher reports that a deadline set unanimously Wednesday by the Albany City Commission for the city’s Historic Preservation Commission to sign off on Certificates of Approval that would allow Phoebe Putney Memorial Hospital to move forward with construction of a planned joint “Living and Learning Community” with Albany Technical College passed with no action Friday, negating a ruling by the preservation commission and allowing Phoebe to move forward with the $40 million project.

Ross Williams reports that Mason Goodwin, a recent graduate of Atlanta Public Schools, told a Senate committee Friday that securing his diploma seemed to be more of a challenge for him than some of his classmates who live in different ZIP codes. Goodwin said he comes from a lower-income, single-parent family, and he was one of several Georgia Youth Justice Coalition activists who came to the Capitol to urge lawmakers to provide extra funding for students living in poverty.

Jill Nolin reports that a federal judge has rejected the Biden administration’s rationale for blocking Gov. Brian Kemp’s plan for partial Medicaid expansion, allowing the program to be implemented. Judge Lisa G. Wood ruled Friday that the federal government’s decision to take back approval for key eligibility requirements was unlawful, calling the move “arbitrary and capricious.”

Mary Landers reports that the U.S. Supreme Court on Friday morning issued a one-paragraph order that once again removed two statewide Public Service Commission races from the November ballot. The decision marks the third ballot change in two weeks regarding the PSC elections for District 2 and District 3.

Maya T. Prabhu reports that Georgia residents began to learn how to navigate a pandemic, the number of households receiving food stamps year-over-year had begun to decline, but, in recent months, enrollment has started creeping up again. At the same time, fewer Georgians are receiving welfare benefits this year than last, a downward trend that’s existed for more than a decade as government officials sought to reduce the rolls.