Staff reports that on Friday, Governor Brian P. Kemp announced the investment of $240 million to support the continued expansion of high-speed internet services to Georgians. These funds will be made available through the Capital Projects Fund Grant Program (CPF). 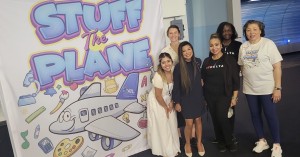 Mary Ann DeMuth reports that the back-to-school season is upon us and that means shopping and school-supply drives. But last week representatives of the ATL Airport Chamber soared above the normal start-of-school events with the first ever Stuff the Plane School Supply Drive.

Zachary Hansen reports that Fayette County, south of Atlanta, may soon be home to one of the largest data center campuses in the world. Quality Technology Services, a Kansas-based data center company, purchased 615 acres in Fayetteville for nearly $154 million.

Orlando Montoya reports that Georgia cotton farmers are feeling the pinch of a massive drop in prices for the crop over the past few months. Experts blame recent market volatility on recessionary pressures, a drop in clothing demand and the U.S. dollar’s rise in value.

Gordon Jackson reports that Hyundai Motor Co. has been among the Port of Brunswick’s most important customers for the past 35 years. Along with GM, Honda, Toyota, Volvo, Polestar, VW and KIA, Hyundai has made the port the nation’s second busiest for roll-on/roll-off cargo.

Latrice Williams reports, as land is being cleared for the Hyundai plant in Bryan County, more businesses are flocking to the area. WebstaurantStore, a wholesale food service supplier, will develop a new 1,157,333-square-foot distribution facility at 54 Logistics Drive, bringing more than 200 jobs to the area.

Maija Ehlinger reports that the City of Peachtree Corners is looking to pave new roads between the startup communities in Atlanta and Taiwan. Curiosity Lab, the city’s innovation park focused on smart cities and mobility technologies, is partnering with Startup Terrace, an entrepreneurial hub supported by the Taiwanese government and organized by Taiwan’s Ministry of Economic Affairs.

Georgia’s electricity rates lower than national average, but higher than nearly all of its neighbors

An insurance policy for coastal Georgia’s salt marshes? Conservationists are considering it

Benjamin Payne reports, between their ability to protect against flood damage, limit erosion and filter water, these fragile ecosystems of meandering creeks and swampy grasslands — a hallmark of coastal Georgia — provide a plethora of services to society. “If we can quantify that, that’s when we can really start to explore innovative funding solutions for protecting and restoring that marsh — one of those potentially being insurance,” said Liz Fly, an ocean conservationist at The Nature Conservancy.

Stanley Dunlap reports that two statewide races are back on the November ballot after a federal appeals court blocked a lower court’s ruling that would have postponed the elections until after the state Legislature adopted a new process that no longer diluted Black voting power. The 11th Circuit Court of Appeals on Friday stopped the U.S. District Court injunction from going into effect, siding with the Secretary of State’s request to move ahead with the Public Service Commission district races as the underlying case is being resolved.

Rebecca Grapevine reports that the Georgia Senate Study Committee to Review Education Funding Mechanisms will meet next Friday to consider what changes are needed to how schools are funded in the Peach State. Senate Majority Leader Mike Dugan, R-Carrollton, is chair of the committee.

Patricia Murphy and Greg Bluestein report that Georgia Democrats know Stacey Abrams is trailing in recent polls behind Gov. Brian Kemp. But they believe the state’s new restrictive abortion law, which went into effect last month, could change Abrams’ fortunes and the results for a slew of down-ticket Democratic hopefuls.