Staff reports that the State of Georgia’s net tax collections during the first month of FY 2023 totaled nearly $2.21 billion for an increase of $54.2 million, or 2.5 percent, over July 2021 (FY 22), when net tax collections approached $2.16 billion. The changes within the following tax categories account for July’s overall net tax revenue increase. 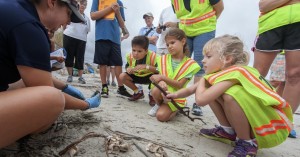 Mary Ann DeMuth reports that last week, Georgia officially hit a record for loggerhead sea turtle nests with approximately 3,966 counted. That number surpassed the previous record, which was 3,956 in 2019. And, Jekyll Island hit its own record with 236 confirmed nests, the highest number ever recorded.

Record year for TV, film production in Georgia: $4.4B in direct spending

Rodney Ho reports that Georgia broke a record yet again in direct spending from TV and film producers in the fiscal year ending June 30, 2022, hitting $4.4 billion, according to the Georgia Department of Economic Development. Companies ranging from Netflix to Amazon took advantage of the state’s very generous tax credit program, which dates back to 2008.

Will it fly? Lockheed seeks unprecedented incentive package in Cobb

Chart Riggall reports that Lockheed Martin’s $1.6 billion bond request to the Development Authority of Cobb County last month was unprecedented — the largest ever considered by the authority. The ask is also “the first of its kind” in Cobb, said Development Authority Executive Director Nelson Geter, in that the authority doesn’t yet know how much financing it might ultimately give the aerospace giant.

Trevor Williams reports that Georgia-based insurance giant Aflac Inc. is still waiting for sales in Japan, its largest market, to recover after the lull introduced by the pandemic. The dollar’s 15 percent rise in value against the yen in the last three months also impacted results, with the weaker yen showing up as lower revenue when converted into dollars for accounting purposes.

Molly Samuel reports that the federal government is spending $117 million on energy and water efficiency upgrades at a dozen of its buildings in Georgia. It’s part of a larger government effort to cut down on the pollution that causes climate change, but by saving energy and water, it also saves taxpayer money, according to General Services Administration Administrator Robin Carnahan, who was in Atlanta this week to announce the investments.

T.A. DeFeo reports that the Georgia Department of Transportation hopes to secure federal funding to pay for a network of electric vehicle charging stations across The Peach State. GDOT has submitted the state’s Electric Vehicle Infrastructure Deployment Plan required to tap into federal funding for developing the network.

Asia Ashley reports that an online petition to impeach Supreme Court Justice Clarence Thomas, a Georgia native, has garnered more than 1 million signatures. But it is unclear if calls for impeachment will deter Georgia lawmakers from continuing plans to install a monument of Thomas on the grounds of the state Capitol.

Mary Landers reports that a federal court ruled Friday that Georgia’s unusual system for electing members of the state Public Service Commission (PSC) violates the federal Voting Rights Act and must be changed because it dilutes the Black vote. The PSC regulates the state’s public utilities, including Georgia Power, and sets utility rates.

Stanley Dunlap reports that a new state Senate study committee heard from nonprofit and state agencies at a daylong meeting across from the Capitol about a homelessness problem that’s been complicated by out-of-control housing costs, bureaucratic red tape and disagreements over the best ways to help.

Dave Williams reports that local development authorities have been at the heart of the biggest business deals in Georgia, including the record-breaking incentives that lured electric-vehicle manufacturers Hyundai and Rivian to the Peach State. But such huge incentives packages as the $1.8 billion that went to Hyundai and the $1.5 billion doled out to Rivian have given rise to concerns that local governments and schools are losing massive amounts of tax revenue to development authorities without sufficient state oversight or demands for transparency.

‘Nobody wants a runoff’: Georgia braces for chance of overtime — again

Brittany Gibson reports that all of the pieces are falling into place for Georgia to decide control of the Senate again. And just like in 2020, it might take extra weeks of campaigning to do it.

The Jolt: Abrams and Kemp go hunting for new voters

Greg Bluestein reports that Stacey Abrams narrowly missed forcing a runoff against Brian Kemp in 2018 thanks to a strategy focused on mobilizing voters who typically skip midterms. Kemp bested her by building a rural “red wall” that withstood the wave of Democratic energy.