Staff reports that Governor Brian P. Kemp announced that Anduril Industries, a defense technology company that specializes in building advanced technology for US and allied militaries, will invest $60 million in a new manufacturing and research facility in Atlanta, creating more than 180 new jobs in Fulton County over the next three years. “As home to some of the top research universities, colleges, and technical colleges in the country, as well as large active military and veteran populations, Georgia is well established as a leader in aerospace and defense,” said Governor Kemp. 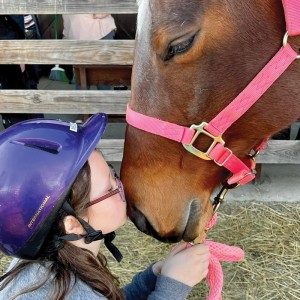 Candice Dyer reports, “Horses just may be the most intuitive creatures on the face of the earth,” says Marie Allen, cofounder and CEO of the faith-based nonprofit in northern Hall County. “To see the kids’ little egos when they’re chosen by a 1,000-pound animal – it’s a pure kind of validation, and they can tell that horse anything.”

Spencer Donovan reports that the Georgia Department of Transportation will partner with real estate giant JLL on a plan to expand electric vehicle charging stations across the state and obtain federal funding to help do it. The plan will help GDOT apply for funds from a $5 billion electric vehicle infrastructure grant program established in the 2021 federal bipartisan infrastructure law, according to a news release this week.

Marisa Mecke reports that a Georgia manufacturing site that served as the epicenter for a chemical release that killed thousands of fish in the Ogeechee River soon plans to shutter and relocate to another state. Milliken & Company, which owns a Sylvania-based textile manufacturing facility, is closing that location’s doors and moving its operations to South Carolina.

Chart Riggall reports, since the boom decades of yore, Cobb County has seen a steady leveling off in its annual population growth. That trend has continued in 2022 with an estimated 6,900 new residents added to the county, according to numbers released this week by the Atlanta Regional Commission (ARC).

Maria Saporta reports that after a two-year hiatus, the 2022 Beloved Benefit filled the field of Mercedes-Benz Stadium with more than 2,000 attendees representing all sides of Atlanta. The July 7 dinner, hosted and presented by Atlanta philanthropists Arthur Blank, owner of the Atlanta Falcons, and Dan Cathy, chairman of Chick-fil-A, has raised a total of $6.3 million so far to donate to a host of nonprofits working on fostering greater economic mobility among its residents.

T.A. DeFeo reports that Georgia isn’t immune to the highest inflation in decades, and local pundits say the federal government is at least partly to blame. On Wednesday, the U.S. Bureau of Labor Statistics announced that the Consumer Price Index for All Urban Consumers increased 1.3% in June and 9.1% over the last 12 months.

Curt Yeomans reports that Gwinnett County could determine the political fate of not only Georgia, but also the entire nation in the November general election, according to POLITICO. The online political journalism website named Gwinnett one of 20 counties across the U.S. that will likely decide the fate of this year’s midterm elections.

Dave Williams reports that despite being from different political parties, the two incumbents atop the Georgia ballot this year are leading their respective races, according to a new poll. Republican Gov. Brian Kemp is ahead of Democratic challenger Stacey Abrams 52% to 45%, according to a survey commissioned by AARP Georgia.

Tia Mitchell reports that the Senate should not allow partisan bickering to derail negotiations on a China competitiveness bill, U.S. Sen. Raphael Warnock says in new letter to the chamber’s highest-ranking members. Writing to Senate Leader Chuck Schumer and Republican Leader Mitch McConnell, Warnock says he and others have spent almost a year working on legislation that would address the semiconductor shortage and other supply chain issues while also boosting American research and innovation.