Staff reports that Governor Brian P. Kemp yesterday issued Executive Order 07.13.22.01, directing the Department of Administrative Services (DOAS) to create the position of Small Business and Supplier Diversity Manager. “Small businesses are important to the growth and success of Georgia’s economy and are responsible for employing nearly half of Georgia’s workforce,” said Governor Kemp. 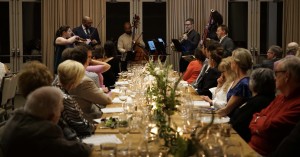 Chamber music pairs with food and wine at Serenbe

Sucheta Rawal writes, what can be more perfect than farm-fresh food and the world’s finest wines enjoyed in an idyllic setting not far from Atlanta? The answer is – paired music! Not any ordinary background restaurant music — not even a live soothing jazz band or echoing techno beats – but Tertulia, a chamber music series that only takes place in restaurants.

Kelly Yamanouchi reports that Delta Air Lines on Wednesday said it will halt flight growth for the remainder of the year despite surging demand, to avoid mass cancellations that plagued the carrier this summer. Travelers have shaken off fears of COVID-19 and are taking to the skies at levels not seen since 2019, before the pandemic.

Trevor Williams reports that Atlanta-based Green Boom, which sells eco-friendly absorbent products for cleaning up oil leaks and spills, has signed a deal to open a factory and distribution center in Qatar that will serve markets in the Middle East and beyond. CEO Sudhir Sharma, a Ph.D. chemical engineer from Georgia Tech who co-founded the company in 2018, signed the deal with the Investment Promotion Agency Qatar during the Qatar Economic Forum in June.

John Druckenmiller reports that Bordeau Metals is moving ahead with plans to use 18 acres to help “reduce” some of the metal that will be coming from the decommissioning of Plant Hammond. The Development Authority of Floyd County got an update on Bordeau and some additional players at the Wednesday morning meeting in the Rome-Floyd County Development Authority conference room.

Erin Schilling reports that the staff reduction isn’t expected to affect manufacturing jobs, according to a letter from CEO RJ Scaringe to his employees. That means plans for its $5 billion Georgia investment shouldn’t change.

Curt Yeomans reports that Gwinnett County continues to inch closer to surpassing the 1 million population mark after the county added an estimated 13,460 new residents in the last year, according to figures released by the Atlanta Regional Commission on Wednesday. The ARC’s latest population estimates peg Gwinnett’s total population at 983,702 residents.

Grant Blankenship reports that as the unhoused become more and more a part of our daily lives, some communities are starting to take action. Sometimes, like in Macon, that means simply pushing the unhoused out of the way. But in other cities, it can mean creating plans to get people off the street.

Alan Mauldin reports that when it comes to Albany’s $70 million in requests and Dougherty County $36 million, the numbers don’t add up to the $100 million anticipated in sales tax collections over a six-year period. That’s because this time the city is asking for a 70-30 split instead of the 64-36 split used for the last several special-purpose local-option sales tax initiatives.

Jill Nolin reports that the state’s one-year residency requirement to serve on the Georgia Public Service Commission does not apply to the Democratic nominee running to finish a former commissioner’s term, a judge has ruled. Shelia Edwards won the three-way Democratic primary outright in May, but she does not live in District 3, which includes Fulton, DeKalb and Clayton counties.

Alessandro Marazzi Sassoon reports that while Georgians’ pocketbooks might be hurting from sky-high inflation and ripple effects of the Covid-19 pandemic, those same factors combined with the state’s conservative fiscal policy and a hot economy have given the Peach State an unprecedented multi-billion dollar budget surplus. How this money will be spent is a question voters will decide in November when they pick their governor and a new legislature.

T.A. DeFeo reports that illegal gambling continues to thrive in the United States because of states like Georgia that ban betting on sports. That’s according to a new report from the Consumer Choice Center, an advocacy group fighting for “lifestyle freedom, innovative technologies, and smart regulation.”