Staff reports that Governor Brian P. Kemp signed two executive orders on Friday to alleviate the financial burden placed on Georgians due to the federal government’s gross mishandling of inflation and to renew efforts to address supply chain issues. 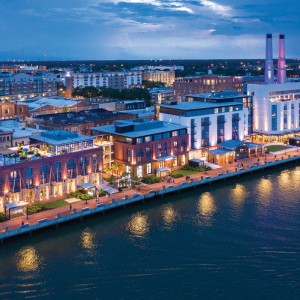 Betty Darby reports that passion projects that embraced partnerships – that personifies the 2022 crop of TravelBlazers, the initiatives chosen by the Georgia Association of Convention and Visitors Bureaus (GACVB) and Georgia Trend that exemplify innovation in the state’s diverse tourism industry. Each of these projects had a champion (or champions) who sought and found the partners to make it possible.

Michael E. Kanell reports that the family that owns Midtown Atlanta’s iconic Varsity restaurant said Friday it is weighing options for a possible redevelopment of its property. But the purveyors of frosted oranges and chili dogs will still be hollering ”What’ll ya have?” for the foreseeable future. https://www.georgiatrend.com/2022/06/29/2022-travelblazers/

‘The future of aviation’: Augusta airport joins program for rewriting rules of drone use

Joe Hotchkiss reports that drones aren’t swooping into neighborhoods for daily deliveries just yet, but Augusta Regional Airport is helping government regulators guide unmanned aircraft closer to residents’ front doors. Augusta Regional recently struck an agreement with the University of Alaska Fairbanks, one of the lead participants in a federal initiative to study how civil and public drones can be integrated into national airspace.

Chart Riggall reports that Cobb County lawmakers, led by state Rep. Teri Anulewicz, D-Smyrna, are lobbying federal officials for Lockheed Martin’s LMXT plane to be chosen as the U.S. Air Force’s next aerial fuel tanker. Should the plane win out, it would be partially constructed at Lockheed’s Marietta plant.

Stanley Dunlap reports that environmental‌ ‌groups are calling on the U.S. Congress to take action after a U.S. Supreme Court limiting the ability to enforce carbon emission pollution dealt a blow in the fight against climate change. The West Virginia v. Environmental Protection Agency opinion was a victory for Georgia and 18 other Republican-led states as it limits Democratic President Joe Biden’s ability to pursue his climate goals.

Is Lula ready for a 519-home subdivision? This study will examine proposal

Conner Evans reports that Lula recently decided a proposed 519-home subdivision needs more time for review. It is one of the largest subdivisions ever proposed in the small city in northeast Hall, which has a population of about 2,822, according to the 2020 census.

Maria Saporta reports that Georgia leaders have united in a quest to land the headquarters of a new federal health-related agency — an effort that would solidify the state’s role as the epicenter for global health. The administration of President Joe Biden already has allocated $1 billion for the new Advanced Research Projects Agency for Health (ARPA-H) to improve the nation’s ability to speed biomedical and health research on ways to cure cancer, Alzheimer’s disease, diabetes and other afflictions through national and international research partnerships.

Donny Hakim and Richard Fausset report that Rudolph W. Giuliani has emerged as a central figure in a Georgia criminal investigation of efforts by Donald J. Trump and his allies to overturn his election loss in the state, with prosecutors questioning witnesses last week before a special grand jury about Mr. Giuliani’s appearances before state legislative panels after the 2020 vote, the witnesses said. For Mr. Giuliani, the developments are the latest in a widening swath of trouble.