Staff reports that Governor Brian P. Kemp on Tuesday announced that Boston Scientific, a leading manufacturer of medical devices used in interventional medical specialties, will construct a new manufacturing and supply chain facility in Johns Creek. The $62.5 million investment is expected to bring roughly 340 new jobs to Fulton County over the next seven years. 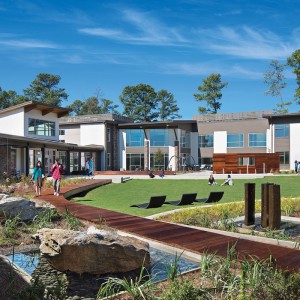 Candice Dyer reports that the early 1980s, Atlanta offered few mental health resources to help people make the pivotal transition from inpatient care to reintegration into the community. West Lumber Company helped purchase an old apartment building for that use, which launched Skyland Trail, one of the most venerable facilities in the Southeast.

Visa, nonprofit to give laptops, digital training to 1,000 Atlantans

Spencer Donovan reports that more than 1,000 residents and small businesses will receive laptops, digital skills training and one year of tech services from Human-I-T, Visa CEO Al Kelly said at a launch event Tuesday. More than 15% of Atlanta households do not have access to a computer, said Michelle Gethers, Visa’s chief diversity officer.

Alexandra Simon reports that Delta Air Lines is taking extra steps to try to alleviate flight disruptions ahead of what’s expected to be an incredibly busy Fourth of July travel weekend. On Tuesday, Delta issued a systemwide fare difference travel waiver from July 1-4, meaning customers planning to travel on these dates can rebook their flights before or after the holiday weekend with no fare differences or change fees.

Jake Busch reports that rehydration is coming to Marietta. BIOLYTE, the company that makes a drink of the same name and which it says is “the first recovery drink to contain the same amount of electrolytes as an IV bag,” announced Tuesday that it will relocate to a new warehouse in Marietta.

Dave Williams reports that Ocmulgee Electric Membership Corp. (EMC) announced plans Tuesday to launch a fiber-optic network that will provide high-speed internet service to customers in five Middle Georgia counties. The EMC, headquartered in Eastman, will partner with Kansas City-based Conexon Connect to deploy broadband across 2,100 miles to up to 8,000 customers in Laurens, Dodge, Bleckley, Pulaski and Telfair counties.

UNG is preparing for $5 million loss in state funding. Here’s what that could mean

Ben Anderson reports that the University of North Georgia is bracing for a $5 million loss in state funding next year due to a decline in student enrollment, which means vacancies would be left unfilled and faculty would likely be laid off. “We’re not looking at tenure-track faculty,” Provost Chaudron Gille said in an interview Tuesday.

Stephanie Allen reports that U.S. Sen. Jon Ossoff made a stop at the University of Georgia on Tuesday to talk about his new agricultural initiatives for the state and touched on the recent Dobbs abortion decision by the Supreme Court. Ossoff unveiled a new initiative to support Athens-based facilities, including the partnership between UGA and Fort Valley State University, UGA’s Veterinary Diagnostic Lab and the U.S. National Poultry Research Center in Athens-Clarke County.