Zoe Nicholson reports that a weekend earthquake has rendered parts of Hutchinson Island unstable, including the ferry dock and Westin parking garage, by causing land to settle near the banks of the Savannah River. The settling began Saturday morning following a 3.9 magnitude earthquake, according to an email the Savannah Morning News obtained from Savannah City Manager Jay Melder, which he sent to a number of county and city employees this weekend. 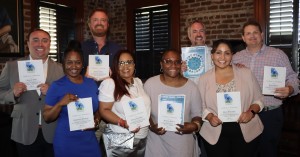 Mary Ann DeMuth reports that Leadership Southeast Georgia (LSEGA) is seeking the next cohort of working professionals for its 2023 professional development and leadership program. Nominations for civic, nonprofit and business leaders across the 10-county region are open until August 31.

Spencer Donovan reports that Mercedes-Benz Stadium has received new recognition for its efforts to reach zero waste production, making it the first professional sports stadium in the world, and the second major venue in Atlanta, to receive the designation. The stadium, which is home to the Atlanta Falcons and Atlanta United, announced it received Total Resource Use and Efficiency (TRUE) pre-certification, which is given to facilities that implement the foundational measures needed to cut waste generation to zero.

Staff reports that Cassioli Groups, the Italian producer of automated systems for material handling and intralogistics solutions, announced its expansion into the U.S. market with the new flagship manufacturing plant opening at Creekside Industrial Park in Newnan. Founded in Italy almost 80 years ago, Cassioli has grown into a successful multinational firm with four manufacturing plants worldwide, including Italy, Poland, Brazil and Newnan.

Julia Fechter reports, surrounded by government and healthcare officials, Northeast Georgia Medical Center Lumpkin’s Interim President, Sonja McLendon, called the new planned hospital facility “truly a community effort.” The new facility on 57 acres at the intersection of Ga. 400 and Ga. 60 is expected to open in fall 2023, though supply chain-related delays could push back its opening until early 2024.

Olivia Morley reports that a new law that will require community service boards to institute a “co-responder” program to deal with mental-health related calls will go into effect July 1. Floyd County Sheriff Dave Roberson has been working on a similar program for about a year now and has been looking to hire or train an officer who would oversee calls that involve people who may be affected by mental illness.

Carter, Warnock team up to bring federal agency to Georgia

U.S. Rep. Buddy Carter, R-1, and U.S. Sen. Raphael Warnock, D-Georgia., teamed up to lead Georgia’s congressional delegation in asking that the Peach State be considered as headquarters for a new federal agency. The delegation sent the letter to Health and Human Services Secretary Xavier Becerra urging him to house the Advanced Research Projects Agency for Health (ARPA-H) headquarters in Georgia.

Ross Williams reports, in a stunning upset victory, attorney and Georgia Air National Guard officer Chris West defeated former Army Captain Jeremy Hunt in the GOP Congressional runoff for District 2, earning the right to face Democratic Congressman Sanford Bishop in November. With all precincts accounted for Tuesday night, West had 51.3% of the vote to Hunt’s 48.7%. The difference between them was about 750 votes out of more than 28,000.

Dyana Bagby reports that Atlanta City Council wants no city funds to be used to investigate abortion care and for police to make investigations of abortion care the lowest priority, according to a resolution approved June 21. Councilmember Liliana Bakhtiari sponsored the resolution in response to the Supreme Court’s expected decision to overturn Roe v. Wade before its session ends this month.

Greg Bluestein reports that federal investigators have stepped up their investigation into a phony slate of GOP electors in Georgia designed to help Donald Trump’s failed effort to overturn Joe Biden’s victory in the 2020 presidential election. The Justice Department has sought records from Georgia GOP Chair David Shafer and Brad Carver, an attorney and Republican activist who was among the 16 fake electors, according to several people with knowledge of the investigation.