Staff reports that on Friday, Governor Brian P. Kemp signed four bills designed to strengthen and enhance Georgia’s robust workforce. The legislation includes HB 1435, which provides needs-based financial aid to eligible higher education students who experience a “gap” in their tuition funding; SB 397, which recognizes all other state approved high school equivalency programs in Georgia and extends a voucher to cover all associated test fees; HB 1331, which streamlines employment services funded by Title III of the Federal Workforce Innovation Opportunity Act to remove duplication and better assist unemployed Georgians in finding a job or starting a new career; and SB 379, which enables the Technical College System of Georgia to create and expand a registered employee apprenticeship program. 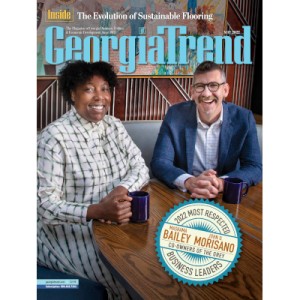 Krista Reese reports that Mashama Bailey and John Morisano finally snap into view on my computer’s split screen, after a few minutes of the typical tech glitches familiar to anyone who’s forced to communicate online these days. While Morisano is keeping an eye on The Grey – their signature, critically acclaimed restaurant in Savannah – Bailey is in Austin, Texas, where the pair is opening two new restaurants.

Ross Williams reports that college students across the state are dealing with plenty of stress from academics, relationships, family issues, and, increasingly, from finances. One of the students gathered on the green was Kevin Lopez, a member of the class of 2024. He’s paying his own way through college by working construction and says he feels the pinch of rising prices.

Maria M. Lameiras reports that low inventory of some varieties, combined with economic pressures exacerbated by supply chain and global issues, are pushing the price of a meticulously manicured lawn higher this spring. Depending on the variety of grass you choose, it might be more difficult to get the grass you want, but you can bet that it will be more expensive according to the 2022 Annual Georgia Sod Producers Inventory Survey conducted by the University of Georgia and the Georgia Urban Ag Council.

T.A. DeFeo reports that a shrinking gross domestic product could cost Georgia taxpayers and is likely to hurt middle-class Georgians in particular as the country appears headed toward a recession, a non-profit policy group said this week. “The tab is coming due for all the reckless stimulus spending during the COVID-19 pandemic,” Erik Randolph, director of research for the Georgia Center for Opportunity, said in a statement.

Mary Ann DeMuth reports, for the third consecutive year, the city of Sandy Springs has been recognized as a 2021 Tree City of the World by the Arbor Day Foundation and the United Nations’ Food and Agriculture Organization. The designation recognizes the city’s commitment to maintaining its urban forest and sustainably managing it.

Aleks Gilbert reports, Republicans vying to represent Georgia’s 14th Congressional District trained their fire on incumbent Marjorie Taylor Greene during a debate Sunday, several of them asking the controversial congresswoman: “What have you accomplished?” The deeply conservative and largely rural 14th District covers most of northwest Georgia.

Stephen Fowler reports, two things are almost certain for Georgia’s new 6th Congressional District: It will be represented by a Republican, and that Republican has pushed false claims about the 2020 election. In a Sunday debate sponsored by the Atlanta Press Club, all nine candidates questioned Georgia’s 2020 election results that saw former President Donald Trump narrowly lose his race but the GOP do well in other races up and down the ballot.

Jill Nolin reports that the governor’s stalled health care plan hit another roadblock Friday when the Biden administration notified state officials it could soon block a proposal to bypass healthcare.gov. The state has so far not responded to three letters seeking additional information, which “alone constitutes a sufficient basis” to suspend implementation of the program, according to a letter from Chiquita Brooks-LaSure, administrator for the Centers for Medicare and Medicaid Services.

Dave Williams reports that a poll released Friday by SurveyUSA comes as good news for Gov. Brian Kemp and fellow Republican Secretary of State Brad Raffensperger heading into next week’s start of early voting for the May 24 primaries. The online survey of 2,000 Georgia adults – including 1,587 registered voters – conducted April 22 through April 27 – found Kemp with a big lead over Republican challenger former U.S. Sen. David Perdue, 56% to 31%.

The Jolt: Trump to stump remotely for Perdue– as grand jury investigating him begins

Patricia Murphy, Greg Bluestein and Tia Mitchell report that Donald Trump’s name hardly came up during Sunday night’s Republican governor’s debate (we’ve got a full write up on that below). But David Perdue is still banking on his help in his challenge to sitting Gov. Brian Kemp as early voting gets underway. The former president is holding a tele-rally on Monday night to urge his supporters to punish Kemp and vote for Perdue.