Trevor Williams reports that moving its global headquarters from its longtime Buckhead base to a new 13-story tower nearby demonstrates Atlanta-based Novelis Inc.’s optimism about long-term global growth trends in the aluminum sector. Novelis is the naming partner and initial tenant for One Phipps Plaza, a new office building developers say is the culmination of plans to “reimagine” the luxury shopping mall into a broader live-work-play “ecosystem” complete with upscale offices, hotels and a variety of food options. 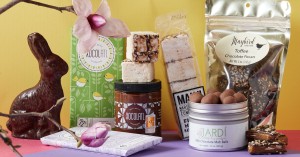 Sucheta Rawal writes, if you are planning to celebrate Easter by purchasing store-bought chocolate eggs and bunny-shaped candy, you may want to think outside the box – literally. Handmade artisan chocolate not only tastes better, it also helps local small business owners thrive and give back to the global community.

Kelly Yamanouchi reports that Delta Air Lines will end its $200 per month healthcare surcharge imposed on employees not vaccinated against COVID-19, CEO Ed Bastian said in an interview with The Atlanta Journal-Constitution. With nearly all Delta employees now vaccinated, the healthcare surcharge — intended to nudge reluctant employees towards getting their shots and cover increased medical expense risk — will discontinue at the end of this month, Bastian said late Tuesday.

Tom Spigolon reports that one of the four state-sponsored Rivian Project Planning Committees is set to begin its work Monday, April 18, when the panel responsible for site design and environmental matters meets in Monroe. The Site Design and Environmental committee is scheduled for a 5:30 p.m. meeting at Athens Technical College’s Monroe campus at 212 Bryant Road.

John Druckenmiller reports that this is a busy spring for the business community, especially for shops moving to new homes. You almost need the much-cliched scorecard to track the ongoing retail and restaurant changes in Northwest Georgia. It has meant mostly pluses for downtown Rome, with one pending exit as well.

Jasmine Robinson reports that at the Southwest Arts Center on March 22, the City of South Fulton is having its monthly city council meeting. In the lobby, there’s live music, an art gallery and maps of the city that indicate council districts and the changes in state House and Senate districts. It comes together to create an atmosphere that differs from your typical city council meeting.

Chart Riggall reports that a second lawsuit seeking to block a Cobb County cityhood referendum was filed Wednesday, this time taking aim at the proposed city of Lost Mountain.

Justin Gray reports that thousands of neighbors of a metro Atlanta community received notices that for months their water contained amounts of a dangerous carcinogen above the legal limit. Channel 2 investigative reporter Justin Gray learned the chemical tends to build up in less frequently used or older water lines. While the notice went out to every customer, water officials in Coweta County told Gray they do not believe all those customers are at risk.

Beau Evans reports that after almost a decade of false starts, this was supposed to be the year state lawmakers finally paved the way for more gambling in Georgia besides just the lottery, according to many Capitol insiders. The General Assembly’s most powerful lawmaker, Georgia House Speaker David Ralston (R-Blue Ridge), signaled he’d support a measure letting Georgia voters decide whether to allow casinos, sports betting and horse racing in their communities.

T.A. DeFeo reports that Georgia Gov. Brian Kemp signed a trio of bills intended to support the state’s farmers. “As the global marketplace continues to react to Russia’s unprovoked and unjust war in Ukraine — Europe’s breadbasket — the importance of the ag sector here in America, and especially here in Georgia, will only continue to grow,” Kemp, a Republican, said in prepared remarks.

Ross Williams reports that a couple miles from downtown Ball Ground in north Georgia lies a piece of land bounded by the Etowah River and Long Swamp Creek. It’s the kind of spot where a nature lover could spend hours wandering the woods and rolling hills marveling at the wildlife and picturesque scenery.

Dave Williams reports that the head of three state transportation agencies is leaving next month for the private sector. Chris Tomlinson has served as executive director of the State Road and Tollway Authority, the Georgia Regional Transportation Authority and the Atlanta-Region Transit Link Authority for the last nine years.

Another year, another big surplus for Georgia?

James Salzer reports that Georgia tax collections soared again in March, raising the possibility the state will again end the fiscal year in June with a massive surplus. Revenue collections — mostly from income and sales taxes — were up 45.5% in March after a sluggish February. They are 18.9% — or $3.59 billion — ahead of a record 2021 with three months left in the fiscal year.