One dead, 8 injured from tornado that hit Bryan County

Latrice Williams reports that one person is dead and eight people were treated for non-life-threatening injuries after a tornado moving 30 mph touched down in Ellabell and Pembroke around 5:30 p.m. on Tuesday night. A state of emergency was declared after significant damage was reported in the Park Place and Homestead neighborhood, the Black Creek Golf Club, Hendrix Park and surrounding areas within the county. 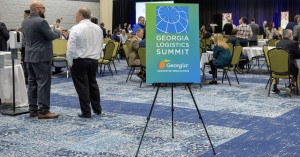 Kenna Simmons reports, it’s hard to overstate the importance of logistics to Georgia’s economy. In 2021, the total sales impact of logistics industries was $83.4 billion, accounting for about 7% of the state’s total sales. The industry is responsible for one of out every nine jobs in Georgia.

Truist to move securities division to Braves’ Battery in Cobb

Scott Trubey reports, there’s more Truist coming to The Battery Atlanta near the Braves ballpark in Cobb County. Truist Financial Corp. said Wednesday it will move the headquarters of its securities and corporate banking division from Buckhead to a new office building just steps from Truist Park.

Georgia Power plans to phase out coal, but coal ash remains a challenge

Molly Samuel reports, while Georgia Power is planning to retire its coal fleet, the state’s biggest utility still has to deal with coal ash, a byproduct from burning all that coal. The company fielded questions about how it’s handling the toxic material at a hearing this week, where officials also laid out their plans for generating energy over the coming decades.

Alan Mauldin reports that the National Weather Service office in Tallahassee, Fla., has confirmed one tornado from Tuesday afternoon storms and is investigating reports of two other potential twisters in southwest Georgia’s Baker and Mitchell counties. “In terms of tornadoes, we can say definitively we had one in Early and Miller counties,” Kelly Godsey, senior service hydrologist at the office, said Wednesday.

Trevor Williams reports that even as Georgia‘s exports to China surged by 22 percent to a record $4.2 billion in 2021, the aspects of the trade relationship that most benefit metro Atlanta — services like plane tickets, port services and foreign-student tuition — plummeted in the prior year. That’s according to a new breakdown of trade figures by the U.S.-China Business Council, which looked at states’ trade in goods for 2021 and services for 2020, the latest year for which statistics are available.

Asia Ashley reports that Gov. Brian Kemp on Monday signed one of the few major pieces of legislation to receive overwhelming bipartisan support this session. The Mental Health Parity Act (House Bill 1013) is the state’s plan for insurers to treat mental health coverage the same as coverage for physical health care coverage.

T.A. DeFeo reports that the Georgia lawmakers capped off the 2022 legislative session by approving the state’s fiscal 2023 budget. The state Senate voted 53-0 in favor of House Bill 911, while the state House voted 160-5.

Beau Evans reports, more Georgians are getting their driver’s licenses without having to wait in frustrating lines or even interact with another human. A big reason why is the huge number of workers who quit the state Department of Driver Services (DDS) during the COVID-19 pandemic, pushing the DDS to bring in machines.

Dave Williams reports that Gov. Brian Kemp continues to hold a sizable lead over former U.S. Sen. David Perdue in the Republican gubernatorial primary race, according to a new poll. The survey of 509 likely GOP voters conducted April 1-3 by Emerson College Polling and The Hill, a newspaper covering Capitol Hill, showed Kemp with 43% of the vote to 32% for Perdue, with 17% undecided.

Cruise control? Walker ignores rivals, aims for Warnock ahead of May primary

Greg Bluestein reports, taking the stage of a packed gym in the foothills of North Georgia, Herschel Walker gave the audience exactly what they wanted: a raft of conservative campaign promises, including a pledge to rid the state of Democratic U.S. Sen. Raphael Warnock. “If I don’t stand up, who is going to stand up for us? I can promise you Herschel Walker is going to be in this race,” the former football star said.