Leaders in poultry, policy are the 2022 inductees to the Georgia Agricultural Hall of Fame

Maria M. Lameiras reports that a pioneer in poultry and a producer who has been a strong advocate in agricultural policy will be inducted into the Georgia Agricultural Hall of Fame on April 9 during the 66th University of Georgia College of Agricultural and Environmental Sciences (CAES) Alumni Association Awards in Athens, Georgia. The honorees are the late J. Henry Massey, who earned both bachelor’s and master’s degrees in poultry science at CAES, a steadfast leader in the poultry science industry in Georgia, and Georgia Farm Bureau President and third-generation farmer Tom McCall, a 1980 animal science CAES alumnus. 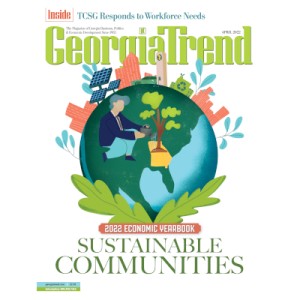 Staff reports, we tend to think of sustainability in connection with the environment – eco-friendly practices that preserve and protect natural resources. However, sustainability is much broader; it includes economic viability and growth for the long term through smart planning and development.

Michael E. Kanell reports that Aspen Aerogels is building a $325 million manufacturing plant in Bulloch County that will produce special materials that will contain potentially disastrous fires in electric vehicles. The 500,000-square-foot plant is scheduled to open next year and will employ about 250 people, said company officials.

Jim Burress and Lily Oppenheimer report, for the last three Atlanta mayoral administrations, contract workers who clean Hartsfield-Jackson International Airport have been calling for higher wages. After 13 years of mostly workers of color pushing, picketing and eventually threatening to strike for above poverty wages, airport cleaners will get a minimum of $12 to $15 dollars an hour.

John Druckenmiller reports that the jobless rates in Floyd and Bartow counties — as well as Northwest Georgia — dropped in February after an uptick in January. Floyd County posted an unemployment rate of 3.2%, down one-tenth of a percent over the month. A year ago, it was 4.4%. Rome had been as low as 2.7% in November and December during the Christmas shopping season.

Charles Oliver reports, from the water you drink to the gasoline you put in your car to the food you eat to the paint on the walls of your home, an additive made by Dalton’s MFG Chemical may have been used to produce it. “We make a number of different additives that improve the efficiency of other processes,” said CEO Paul Turgeon.

Curt Yeomans reports that when former Gwinnett County commission Chairman Wayne Hill looked out a window as he flew a plane over the Buford area in the mid-1990s, he didn’t realize he’d found a site that would one day between a center for water innovation and research. He initially just thought he’d found a place in a remote area to build a sewer plant to meet the demands of a rapidly growing population.

Trevor Williams reports that with war dragging on in Ukraine, German companies may be looking to redirect their supply chains toward more reliable, stable markets. That makes it a great time to reinforce transatlantic friendships exemplified by North Rhine-Westphalia‘s trade and investment office officially opened in Atlanta Wednesday, officials said during an opening ceremony long delayed by COVID-19.

Asia Ashley reports that a state Senate committee scrapped a House-approved bill seeking to task the Georgia Bureau of Investigation with investigating elections and other controversial tenets of the measure. “This is much, much tampered down, and it’s much easier to explain,” said Republican Rep. James Burchett, the bill’s sponsor.

T.A. DeFeo reports that Georgia voters soon could decide whether to allow sports wagering and casino gambling. The House Economic Development and Tourism Committee signed off this week on versions of Senate Resolution 135 and Senate Bill 142. If approved, voters could decide on the measures as soon as November.

Stanley Dunlap reports, with just days left before the state’s 2022 legislative session’s scheduled end Monday, the fate of a bill that would require people accused of felonies to put up cash or property for bail now rests with the Georgia House. On Thursday, Republican members of the House Public Safety and Homeland Security Committee advanced a plan that adds hundreds of felony charges to the list of violent crimes that require a bond in order for a person to be released from jail before trial.

The Jolt: For mental health overhaul, ‘truth is a powerful force’

Tia Mitchell, Patricia Murphy and Greg Bluestein report that a sweeping overhaul of the state’s mental health system will soon be signed into law by Gov. Brian Kemp. But just days ago, the most significant bipartisan legislation of this year’s session seemed headed for a far different fate.