Jill Nolin reports that House lawmakers signed off a tax cut proposal Wednesday that would cut state revenues by $1 billion over objections the proposal disproportionately benefits Georgia’s wealthiest residents. The proposal would replace the state’s graduated income tax rate system, which now tops out at 5.75%, with a single, reduced 5.25% known as a flat tax. 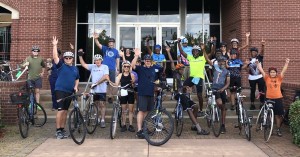 Mary Ann DeMuth reports, as the weather warms and the urge to get outside increases, Bike Walk Macon is once again offering spring biking and walking events. The nonprofit that works for a more bikeable and walkable Macon-Bibb County has a number of free, fun events on tap.

Delta pilots plan to picket at airport over staffing issues

Kelly Yamanouchi reports that the pilots union at Delta Air Lines says the carrier doesn’t have enough buffer in its staffing to manage well through storms or other disruptions, causing pilots to work fatiguing schedules and more overtime. The airline is counting on pilots to work extra flights on their days off in order to maintain its flight schedules, especially when storms or other disruptions require rescheduling.

Staff reports that Governor Brian P. Kemp yesterday announced that he plans to work with the Georgia General Assembly to temporarily suspend the state’s excise tax on motor fuel sales. In Georgia, the average price of a gallon of gas has increased from $2.59 to $4.06 (over 56%) since March of 2021.

Gordon Jackson reports that the Port of Brunswick will undergo a $150 million expansion at its auto port and break bulk terminal for forest products. During a state of the port presentation Wednesday at the Jekyll Island Convention Center, Jamie McCurry, chief administrator of Georgia Ports Authority, explained plans to expand port operations over the next several years.

Sarah Kallis reports that a Republican-led bill aiming to allow Georgia drivers to use their cellphones when stopped was blocked by Republicans in the Senate on Wednesday.  SB 203, sponsored by Sen. Frank Ginn (R-Danielsville), would let drivers use their cellphones if they were stopped at a light or stop sign.

Susan McCord reports, in an about-face, Lincoln County Board of Elections voted against closing multiple polling places Wednesday. The decision is a relief of opponents who’d worked for months to stop it. “This should be a day of celebration, but not yet,” said the Rev. Denice Freeman, who led the local protest, in conjunction with the Georgia Committee for the People’s Agenda and several other voting rights groups.

Does Georgia Spend Too Much on School Administrators Instead of Teachers?

Beau Evans reports that costs to pay public-school administrators in Georgia more than doubled over the past two decades, rising faster than the state’s annual spending on teachers and classroom supplies, State Affairs has found. Across the U.S., states increased their budgets for superintendents, principals and their office staff by an average 89% between 2001 to 2019 – roughly the same rate as public k-12 teachers, federal data shows.

Andy Miller reports that the Georgia House unanimously passed a bill Wednesday that would strip the prescription drug benefit function from Medicaid’s managed care companies. It’s the second House bill approved in as many days that targets financial practices of the three Medicaid insurers in Georgia.

Stanley Dunlap reports that a Georgia bill opponents argue aims to stop protests by trampling on constitutional rights through expanded criminal penalties, added civil liability for local governments that allow protests and authorized violence against protesters. Senate Bill 171 narrowly advanced through the Senate Judiciary Committee with a 5-4 vote along party lines on Tuesday after a hearing where detractors said the bill unlawfully violates freedom of expression and the right to assemble protected by the First and Fourteenth Amendments.

Dave Williams reports that the Georgia House and Senate reached agreement Wednesday on a mid-year budget that provides pay raises and bonuses to state and University System of Georgia employees as well as school workers. Budget negotiators added nearly $450 million to the spending plan at the 11th hour, bringing the mid-year budget to $30.3 billion, thanks to new projections that allowed Gov. Brian Kemp to increase his revenue estimate for the fiscal year ending June 30.

The Jolt: Stacey Abrams’ campaign is about to enter a new phase

Greg Bluestein and Tia Mitchell report that Stacey Abrams is about to steer her campaign for governor into a new phase. Now that she’s formally qualified to run for office, the Democrat is planning a “One Georgia Tour” to begin next week that will take her to small and mid-sized events across the state.