Dave Williams reports that state tax collections rose 1% last month over February of last year, keeping alive a string of consecutive increases in revenues that goes back eight months. The Georgia Department of Revenue brought in more than $1.95 billion in taxes in February, up $19.8 million over the same month a year ago. 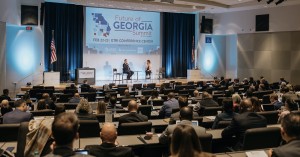 Mary Ann DeMuth reports that on February 22nd and 23rd, the Georgia Chamber of Commerce hosted its second annual Future of Georgia Summit in which industry leaders and experts led discussions about topics critical to maintaining Georgia’s status as the best state in which to do business.

Kelly Yamanouchi reports that Spirit Airlines plans to open a crew base in Atlanta this summer, adding more than 100 pilots and 200 flight attendants based at Hartsfield-Jackson International Airport. Miramar, Fla.-based Spirit is the third-largest carrier at the Atlanta airport, behind dominant carrier Delta Air Lines and No. 2 carrier Southwest Airlines

Norcross racing to quadruple number of public, affording housing units at one site

David Pendered reports that Norcross Housing Authority plans to demolish a 1960s-era housing project to build an apartment complex that is to more than quadruple the number of units of public housing, market-rate workforce housing and affordable housing units.

Staff reports that many Western companies have faced intense pressure to pull out of Russia. Atlanta-based Coca-Cola is one that has not. On Saturday, some Atlantans gathered in Centennial Olympic Park to rally for a boycott of Coca-Cola.

$35 insulin cap is popular and bipartisan, but Congress may not pass it

Michael McAuliff reports that Democrats in the Senate are primed this month to make their first attempt at salvaging one of the most popular elements of President Joe Biden’s stalled Build Back Better plan — the proposal to cap insulin costs at $35 a month.

Asia Ashley reports that an effort to establish a statewide co-responder model as part of mental health reform in Georgia was unanimously approved Thursday in the Senate. Building on the success of local programs currently in operation, the “Georgia Behavioral Health and Peace Officer Co-Responder Act” would create a partnership and collaboration between behavioral health professionals and law enforcement to act as a team in responding to potential mental health-related emergency calls.

Jill Nolin reports that a bill in the Georgia Senate would ban local governments from using federal dollars to build permanent housing for homeless individuals and further financially penalize cities that have a higher-than-average homeless population. It would also make it a misdemeanor to take shelter on state property.

The Jolt: Ukraine war getting used for gun, voting rights arguments in Georgia

Patricia Murphy, Greg Bluestein and Tia Mitchell report that the Russian invasion of Ukraine has quickly become a mainstay of the political back-and-forth in Georgia. But not in the way you might expect.