Staff reports that Governor Brian P. Kemp, in conjunction with the Georgia Department of Economic Development (GDEcD), today announced that economic development projects secured in every region of the State of Georgia resulted in record-breaking job creation for the first half of the fiscal year (July 1 and December 31, 2021). These 160 locations or expansions supported by GDEcD’s Global Commerce division will result in the creation of nearly 24,400 jobs and $9.8 billion investment in the state. 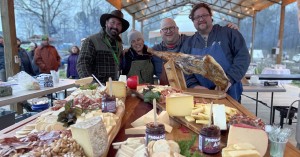 Service of a different kind

Sucheta Rawal reports that when you dine at a trendy restaurant, you may not think of army veterans in middle Georgia. But a group of vets may have grown the heirloom tomatoes or raised the pork that’s on your plate. For them, working the land has not only helped provide quality food, but also helped ease some of their trauma of their military service.

Kelly Yamanouchi reports that Hartsfield-Jackson International is moving forward with plans to revamp one of the most crowded and cramped areas of the airport: Concourse D. The Atlanta City Council transportation committee on Wednesday voted in favor of a $5 million contract for “early pre-construction” planning of the concourse widening project.

Sarah Fay Campbell reports, less than 48-hours before the start of the Chattahoochee Valley Poultry Association’s poultry show and swap meet at the Coweta County Fairgrounds, the state has halted any sale of poultry as well as poultry shows and exhibitions because of an outbreak of bird flu. The Georgia Department of Agriculture sent out a press release at 12:25 p.m. Wednesday.

Emily Jones reports that sea level rise is accelerating, according to a report released Tuesday by the National Oceanic and Atmospheric Administration. It finds coastal communities can expect more flooding and worse storm surges in the coming decades as sea levels rise, on average, 10 to 12 inches by 2050. Coastal Georgia communities have been planning for this, according to Jennifer Kline, coastal hazard specialist with the Georgia Department of Natural Resources.

Susan McCord reports that Augusta Commission candidate AK Hasan is withdrawing from the District 6 contest. The move adds another wrinkle to the GOP-drawn redistricting plan expected to pass the state House this week.

Chatham chairman: ‘We went by their rules’ when drawing, voting on redistricting maps

Will Peebles reports that Chatham Commission Chairman Chester Ellis on Wednesday defended the original redistricting map the commissioners approved in January after a series of miscommunications and disagreements delayed adoption of the new districts by the Georgia General Assembly.

Alessandro Marazzi Sassoon reports that Senator Jen Jordan grew up the eldest child of a single mother in Dodge County. A HOPE scholarship enabled her to go to Georgia Southern University and then law school at the University of Georgia.

Jill Nolin reports that a bipartisan push to increase access to behavioral health treatment in Georgia drew objections from patient advocates troubled by provisions that would create patient registries and make it easier to involuntarily commit people with mental illness. The 74-page bill, sponsored by House Speaker David Ralston, received its first public airing during a nearly three-hour, and at times emotional, committee hearing Wednesday.

Georgia parents, teachers on edge by push to limit discussions on race

Ty Tagami, Vanessa McCray and Josh Reyes report, for Laura Judge, a Black parent in Cobb County, attempts to curb discussions on race in classrooms are worrisome. “I feel like we’ve taken a giant step back,” the mother of two said. “If we avoid these discussions with children, I feel like we’re stunting their growth.”