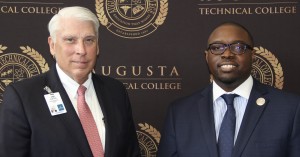 Patty Rasmussen reports that in mid-January, leaders from Augusta Technical College (ATC) and Augusta-based University Health Care System signed a letter of intent (LOI) on a partnership that will transform Augusta Tech’s already booming health science program. The move is meant to further increase the pipeline of local skilled healthcare workers — graduating a minimum of 200 nurses a year within five years of inception — by tapping into the resources of University Health Care System and developing an ATC Health Science Campus on the University Hospital Summerville Campus.

Kelly Yamanouchi reports that Delta Air Lines is asking the U.S. Justice Department to create a national no-fly list of passengers who have been convicted for on-board disruptions. Ed Bastian, CEO of Delta, wrote a letter to U.S. Attorney General Merrick Garland this past week saying such a “national, comprehensive unruly passenger ‘no-fly list’” that would bar those listed from traveling on any airline is a “much-needed step.”

Zoe Nicholson reports that Chemours, a company that split off from Dupont and is one of the only licensed titanium miners in the U.S., agreed not to do business with Twin Pines Management, LLC, the Alabama company that filed for permits to open a titanium mine next to the federally protected Okefenokee Swamp in south Georgia. Chemours said its “foreseeable future” is about five to 10 years.

John Druckenmiller reports, as the Super Bowl countdown continues, the Ball Aluminum Cup is sharing some of the amenities on tap this year. That’s another big win for Ball Corp., a company that is currently planning a $51.8 million 750,000-square-foot warehouse and distribution center in Shannon.

Staff reports that in announcing the recipients for the Broadband Access Grant awarded the state recently, Gov. Brian Kemp announced that the Lee County Board of Commissioners would be granted $12,541,241. With the financial contribution of $7,337,804 million from Windstream, $1.2 million from the Lee County Board of Commissioners and in collaboration with Sumter EMC, approximately 4,234 underserved or unserved Lee County residents and businesses will be provided with high-speed reliable broadband internet service.

Billy Hobbs reports that the future has never been brighter in terms of broadband internet services in Baldwin County and other rural counties across Georgia. Expanded broadband services will soon be available throughout Baldwin County, according to Baldwin County Manager Carlos Tobar.

Sarah Fay Campbell reports that because of the way Georgia law regulates property taxes, Coweta homeowners who had their homes destroyed or seriously damaged during the March 26 2021 tornado still had to pay property taxes on the home’s full value last year. State Rep. Lynn Smith is hoping to change that with a pair of bills she has introduced into the General Assembly.

Ben Anderson reports that many families could get $6,000 vouchers to send their kids to private school under bills being considered in the legislature, which could in turn cost public schools millions in state funding. The $6,000 would be diverted from the state funds of that child’s public school district.

Ga. Senate to vote on tax credits as early as Tuesday, with start this year

Diane Wagner reports that the Georgia Senate could vote as early as Tuesday on proposed tax credits for donations to police foundations and foster care nonprofits. Senate Bills 361 and 370 would allow up to a combined $120 million a year in claims against the tax liability of individual and corporate donors — sending the money instead to local organizations for specified services.

Nyamekye Daniel reports that a bipartisan group of lawmakers has proposed a bill to give a tax break to low-income renters in Georgia. House Bill 979 provides a $60 income tax credit to each Georgian who earns up to $27,000 a year and pays at least $800 a month in rent for six months.

Ross Williams reports that the state House passed a GOP-drawn Gwinnett County commission map Thursday which would give their party more say on the board, but Democrats say the move flies in the face of long-established legislative norms. Typically, local bills such as election maps are approved by the legislators who represent those areas and rubber stamped by the full body.

Dave Williams reports that Georgia’s tax collections were in the black in January for the seventh month in a row, the state Department of Revenue reported Friday. The state brought in about $2.95 billion last month, up $423.5 million, or 16.7%, compared to January of last year.

Greg Bluestein reports that U.S. Sen. David Perdue has made clear that his campaign for governor revolves around Donald Trump. But Gov. Brian Kemp also has no problem invoking the former president to promote his campaign.