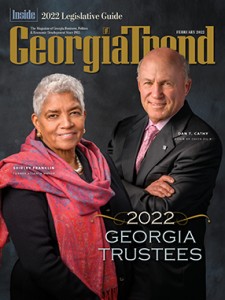 Mary Ann DeMuth and Susan Percy report that the Georgia Historical Society (GHS) teaches history in order to create a better future – to give the people of the state an understanding of how we got to this point, along with the education, tools and perspective to make a difference going forward. Part of that mission is the annual selection of the Georgia Trustees, the state’s highest honor.

Michael E. Kanell reports that union-organizing efforts are underway at several Starbucks stores in metro Atlanta, part of a nascent but growing national campaign. So far, just one Atlanta store has turned in a petition that could trigger a vote.

Georgia Power plans to eliminate coal and double solar by 2035

Molly Samuel reports that Georgia Power plans to close all of its remaining coal-fired power plants by 2035 and add more solar power. The company filed its long-range energy plan with Georgia regulators on Monday.

Trevor Williams reports that Lockheed Martin is pitching a partnership with a European company to make U.S. government’s next refueling tanker aircraft in the South, with the military outfitting potentially creating 1,000 jobs in Georgia.

Maria Lameiras reports that gifts and pledges totaling more than $2.6 million from the R. Harold and Patsy Harrison Foundation have established the R. Harold and Patsy Harrison Distinguished Professorship in Poultry Science to support programs in the Department of Poultry Science at the University of Georgia’s College of Agricultural and Environmental Sciences.

Dave Williams reports that the Georgia Lottery Corp. generated $376.5 million in profits during the last three months of last year, a record for the second quarter of a state fiscal year. That brought the total lottery proceeds transferred to education during the first half of fiscal 2022 to $741.3 million.

Our Perspectives series this month features Dr. Kyle Marrero, President of Georgia Southern University. In this, our fourth video of the series, learn how the university is focused on public impact research. Not only is this Public Impact Research Agenda shaping university activities, but it’s also assisting local communities.

Nyamekye Daniel reports that Lt. Gov. Geoff Duncan is increasing efforts to address public safety in Georgia, announcing a plan Monday to create a co-responder program for law enforcement and behavioral health specialists. The bipartisan bill would allow behavioral specialists to respond to incidents involving people with mental illnesses along with officers.

Ross Williams reports that Gov. Brian Kemp and former Senator David Perdue won’t duke it out at the ballot box until May, but lawyers for both candidates faced off in federal court Monday over whether a new state election finance law unfairly favors the governor. The fight is over a law Kemp signed last year creating special leadership committees top officials from both parties can use to raise unlimited funds during the legislative session.

Ben Anderson reports that Georgia Republicans have introduced two bills this month that propose to ban the teaching of Critical Race Theory in public schools and universities, and violations would be met by pauses in government funding. The more recent bill, Senate Bill 377, was introduced last week by Sen. Bo Hatchett, R-Toccoa, who said in a press release that CRT and other “divisive topics” must be banned in higher education before they start “seeping down into our K-12 schools.”

Greg Bluestein reports that David Perdue launched his first TV ad for governor Tuesday with the same pro-Donald Trump message he’s promoted throughout his challenge to incumbent Brian Kemp. But this time the former president makes it for him. Flanked by two American flags, Trump opens the ad for the former U.S. senator claiming that “Brian Kemp let us down” in the 2020 election before he mocks Democrat Stacey Abrams, who will face the winner of the GOP primary.