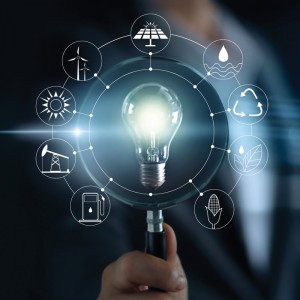 Patty Rasmussen reports that in 2018, when Facebook announced it was opening a massive data center in Newton County, bringing an initial investment of $750 million, it had a big request: to be powered 100% by renewable energy. Fortunately, Georgia was ready and the social media giant is getting its wish. The campus east of Atlanta will be powered by solar energy produced by Silicon Ranch Corp., which broke ground in October on a $220 million, 250-megawatt (MW) solar farm in Lee County.

Delta to use bamboo, biodegradable items for some in-flight service

Kelly Yamanouchi reports that Delta Air Lines is switching to bamboo cutlery for fresh packaged meals in first class as part of a broader effort to reduce single-use plastics on flights. Delta said that and other changes planned for onboard service will reduce its plastic use by about 4.9 million pounds annually.

David Pendered reports that Georgia Power’s three-year plan to meet the state’s energy needs is due to be filed with state regulators by Jan. 31 and marks the start of a yearlong discussion of a wide array of energy topics. Georgia Power is to submit its Integrated Resources Plan (IRP) with the Georgia Public Service Commission (PSC) by Jan. 31.

Alan Mauldin reports that the state of the economy is looking up, but the Albany area likely will lag the rest of the state and nation as a whole in recovering jobs lost during the “COVID recession.” That was the assessment by two experts from the University of Georgia’s Terry College of Business.

Sarah Kallis reports that Senate Bill 231 would provide a pathway for students who dropped out of high school to receive their diploma through charter schools. Adults between the ages of 21 and 35 would be eligible for the program — and tutoring, free transportation, and child care would be provided for them.

Jim Burress and Sam Gringlas report that Georgia Senate Republicans filed a bill Wednesday that would address how race is taught in classrooms, from elementary schools to colleges. Specifically, Senate Bill 377 would prohibit K-12 schools and higher institutions like units under the University System of Georgia and state technical colleges from teaching “divisive concepts.”

Beau Evans reports that for 15 years, state Rep. Ron Stephens (R-Savannah) has tried bringing more gambling to Georgia. Hopes rose each year, bills inched a little further than before, but every move ended in defeat. This year feels different.

Diane Wagner reports that a major update to the state retirement program is among the proposals Gov. Brian Kemp will present at a military roundtable in Warner Robins on Thursday. Sen. Chuck Hufstetler, R-Rome, is carrying the legislation for Kemp and is slated to be among the local, state and federal leaders joining the governor and First Lady Marty Kemp.

Jill Nolin reports that a bipartisan group of lawmakers led by the highest-ranking Republican in the House unveiled a proposal Wednesday designed to begin the work of lifting Georgia from near the bottom when it comes to access to mental health treatment. House Speaker David Ralston, a Blue Ridge Republican, told a large crowd assembled at the state Capitol that he envisioned the measure as the beginning of a commitment to remake the state’s mental health system.

Dave Williams reports that letting first responders with post-traumatic stress disorder (PTSD) collect workers’ compensation to pay for their treatment would ensure mental illness is treated the same as physical injury, supporters told Georgia lawmakers Wednesday. But the fate of House Bill 855 remained uncertain after Rep. Bill Werkheiser, R-Glennville, chairman of the House Industry & Labor Committee, announced he would refer it for vetting to a 110-member council that advises the State Board of Workers’ Compensation.

Greg Bluestein reports that President Joe Biden’s approval rating has fallen off a cliff in Georgia, according to an Atlanta Journal-Constitution poll released Thursday that showed just one-third of registered voters approve of the Democrat’s job performance. That’s a sharp decline from the 51% of voters who gave Biden high marks in the AJC’s May poll.