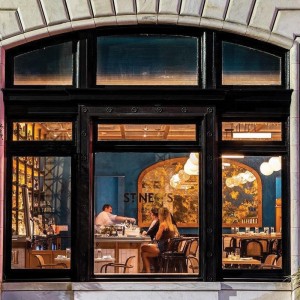 Sucheta Rawal reports, located in one of Savannah’s oldest buildings that dates back to the 1890s, St. Neo’s Brasserie is not your typical hotel restaurant. For starters, the interior is a dream come true for decorators and makeover enthusiasts.

5G expansion not planned for area around Hartsfield-Jackson

Kelly Yamanouchi reports, while Hartsfield-Jackson International is not one of the airports directly affected by the planned rollout of 5G mobile technology, that doesn’t mean there won’t be an impact on travelers here. Airline industry leaders say the expansion of 5G mobile technology could interfere with the instruments on some airplanes, and they asked the Biden Administration to intervene to prevent severe flight disruptions.

Trevor Williams reports that Ciara O’Floinn  didn’t characterize it as a regret, per se, but if the former Irish consul general had more time in Atlanta, she’d likely have spent much of it fostering new conversations on equity and diversity.

Stanley Dunlap reports that Georgia’s prison system could undergo a radical change with Gov. Brian Kemp’s proposal to spend $600 million to open two new prisons that would replace four outdated correctional facilities with the aim to make prisons safer and cut costs. The governor recommended in his spending plans that the state purchase a newer prison and build a 3,000-bed facility, a decision he called a historic investment when he announced the plans last week.

Max Blau reports, for the past several years, Georgia Power has gone to great lengths to skirt the federal rule requiring coal-fired power plants to safely dispose of massive amounts of toxic waste they produced. But previously unreported documents obtained by ProPublica show that the company’s efforts were more extensive than publicly known.

Curt Yeomans reports that two Democrats have recently announced plans to run for the House District 97 seat in western Gwinnett that will be open in this year’s elections. Ruwa Romman and Jonathan “JT” Wu each announced bids for the seat, which is largely made up of the current House District 95, although the western part of that district was moved into the new state House District 48.

Georgia tax collections up 18% for first half of fiscal 2022

James Salzer reports that state tax collections were up 24.3% in December as Georgia’s economy remained strong through the holiday season. For the first six months of fiscal 2022, collections are 18.1% ahead of last year, or $2.28 billion.