Staff reports that the Georgia Department of Economic Development (GDEcD) announced today that Lineage Logistics, the world’s largest temperature-controlled industrial REIT and logistics solutions provider, will invest $62 million in opening a new, temperature-controlled storage facility near the Port of Savannah in Chatham County. 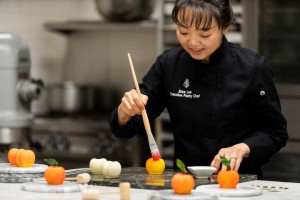 Sucheta Rawal reports that the holidays are a time to come together with family, create new memories and be grateful for the years past. But it’s easy to get stressed by the thought of planning the perfect meal that meets every dietary need.

Ariel Hart reports that the top federal official in charge of negotiating with Gov. Brian Kemp on Georgia’s high-stakes health care proposals visited Atlanta on Tuesday to talk about maternal health and other topics. But Chiquita Brooks-LaSure, the Centers for Medicare and Medicaid Services administrator, had no answers for when any of the half-million adults uninsured under current Georgia Medicaid rules might have a pathway to coverage.

Trevor Williams reports that “unshackled” from the trade policy of the European Union, the United Kingdom is pursuing formal economic ties with states like Georgia even as it continues to press for a comprehensive bilateral agreement with the U.S., a top trade official for the British government said Tuesday.

Fort Valley State received a $2.5M gift. Here’s what the college plans to do with it.

Staff reports that Fort Valley State University opened an early Christmas present: Monday, the school announced that it had received the largest single contribution in school history, a $2.5 million gift from an anonymous donor.

Maria M. Lameiras reports that a $200,000 grant from the Franklin P. and Arthur W. Perdue Foundation, the charitable giving arm of Perdue Farms, will help support the construction of the University of Georgia’s new Poultry Science Building, which will begin construction in spring 2022.

Is Port Wentworth one of the most affordable places to live in Georgia?

Nancy Guan reports that Port Wentworth is one of Chatham County’s booming westside cities. The municipality also ranks as one of the most affordable places in Georgia. According to an analysis by the fintech company SmartAsset, Port Wentworth’s overall home costs compare favorably to other cities with a population of at 5,000 residents.

Joe Hotchkiss reports that the Savannah River Site nuclear facility delivers an estimated $2.2 billion impact to the regional economy, an Augusta University study concluded. That figure likely could have reached higher, if not for a recurring culprit in U.S. economic misery – COVID-19.

Maria Saporta reports that Atlanta now has a new center dedicated to stuttering education and research, thanks to a $12.25 million grant from the Arthur M. Blank Family Foundation. A ribbon-cutting was held on Tuesday to dedicate the first satellite location of the Arthur M. Blank Center for Stuttering Education and Research at the University of Texas at Austin’s Moody College of Communication.

Mary Landers reports that among the Georgia Water Coalition’s annual “Dirty Dozen” this year is the 100-mile long Georgia Coast because of its vulnerability to the effects of climate change. It’s the first time in the 11-year history of the report that climate change has been named an issue.

Patricia Murphy, Greg Bluestein and Tia Mitchell report, will Gov. Brian Kemp still back Sonny Perdue to lead Georgia’s higher education system, even as his first-cousin David Perdue tries to unseat Kemp in the Republican primary? It’s one of the biggest questions that Kemp will have to answer soon– and it’s not as cut-and-dry as you might think.