Will Grice reports that Marietta may no longer be home to the world’s biggest chicken, but its rival in south central Georgia faces an uncertain future. The city of Fitzgerald’s bigger fowl, which residents have taken to calling “Rusty,” currently stands at 62 feet tall; six feet taller than Marietta’s famed Big Chicken at the corner of Cobb Parkway and Roswell Road. 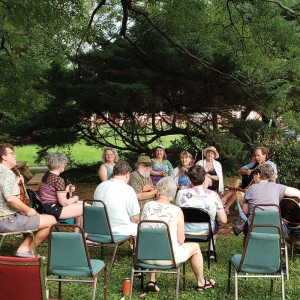 Candice Dyer reports that the study of music benefits learners of all ages, according to the Frank Hamilton School. The nonprofit, which recently opened its doors in Decatur’s Legacy Park, offers a variety of classes in folk, jazz and blues.

Matt Kempner reports that the pandemic isn’t over, but much of the financial pain it brought to Georgia’s big public companies might be. Some of Georgia’s notable companies, including Home Depot, UPS and Coca-Cola, are faring better as the second year of the pandemic comes to a close.

Trevor Williams reports that after a pandemic hiatus in 2020, Atlanta’s German Christmas market is back this year, relaunching on Black Friday (Nov. 26) at the third location since the tradition was brought to the city five years ago. Though held completely outdoors, the Atlanta Christkindl Market was postponed last year, its quaint wooden booths with striped red and white roofs kept in storage throughout the winter as COVID-19 continued to ravage the country.

Adron McCann reports that according to the Atlanta Food Bank, one in six children in Georgia suffers from food insecurity. The local food infrastructure has only faced more challenges over the last two years due to the pandemic.

Curt Yeomans reports that State Rep. Jasmine Clark, D-Lilburn, has pre-filed legislation to make sure Georgia students are taught about consent during their sex education classes as a way to fight sexual assault. House Bill 857 would require Georgia include consent curriculum in the sex education courses that are taught in schools across the state.

David Pendered reports that Georgia state senators have begun talks on a potential statewide proposal to prohibit discrimination in housing, jobs, accommodations and more. Legislation to ban discrimination is among the possible bills lawmakers are discussing in advance of the General Assembly’s next session, which begins Jan. 10, 2022.

Diane Wagner reports that it’s been a busy year for the part-time Georgia General Assembly, with both the regular 40-day session and the special redistricting session that just ended. And in less than two months they’ll be starting up again.

The Winners and Losers of Georgia’s New Political Maps

Alessandro Marazzi Sassoon reports, redistricting, the once-in-a-decade ritual that wrapped up this week in Georgia, may seem like political insider-baseball, and even the name might make your eyes glaze over. But the process, beset by accusations of gerrymandering and a lack of transparency, is hugely important: it determines the political future of your state, county and city for years to come and affects how state and federal funds will reach your community.

U.S. Rep. Andrew Clyde announces run for re-election after getting drawn out of district

Conner Evans reports that U.S. Rep. Andrew Clyde, R-Athens, announced Tuesday, Nov. 23, he will run for re-election after being drawn out of his home district. His home in Jackson County was drawn into District 10 by state legislators and the map was approved on Monday, Nov. 22. District 10 is currently represented by Rep. Jody Hice, who is vacating his seat next year to run for secretary of state.

John Bailey reports that 14th District Rep. Marjorie Taylor Greene, R-Rome, introduced a bill this week “to award a Congressional Gold Medal to Kyle H. Rittenhouse, who protected the community of Kenosha, Wisconsin, during a Black Lives Matter (BLM) riot on August 25, 2020.” The Congressional Gold Medal is Congress’s highest expression of national appreciation for distinguished achievements and contributions by individuals or institutions.

Patricia Murphy, Greg Bluestein and Tia Mitchell report, it isn’t just Democrats unhappy with the redistricting process that the Georgia General Assembly finalized on Monday, with the approval of all GOP senators and all but two Republican House members. U.S. Reps. Andrew Clyde and Marjorie Taylor Greene, two of the state’s most outspoken Republicans, are slamming the GOP leadership who oversaw the process, which drew Clyde out of his district and reconfigured Greene’s to include liberal portions of South Cobb County.