Trevor Williams reports that Canada’s Dorel Industries is deepening its impact in coastal Georgia, with two separate divisions of the conglomerate netting accolades last month for investments in Bryan and Effingham counties. Dorel Home Products was honored Oct. 26 at the Prosperity for Trade luncheon, where the World Trade Center Savannah named the furnishings company its International Business of the Year, a designation sponsored by Georgia Southern University. 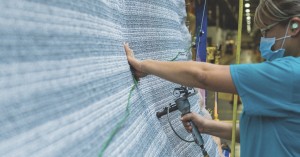 Mary Ann DeMuth reports that Dalton-based flooring products company Shaw Industries recently announced its EcoWorx® carpet tile is among the first in the world to meet the new Cradle to Cradle Certified® version 4.0 standard. Along with EcoWorx®, nearly 90% of Shaw products are certified by the Cradle to Cradle Products Innovation Institute, which sets global standards for safe and sustainable products.

UPS is aiming to hire 60,000 seasonal workers this weekend

Lauren McDonald reports that a recent grant awarded to Georgia Audubon will be used to complete bird-friendly habitat restoration on Jekyll Island. The nonprofit, which works to build places where birds and people thrive, received the grant from the National Fish & Wildlife Foundation’s Five Star and Urban Waters Restoration Program.

Conner Evans reports that Gainesville will soon be able to fill in a missing piece of its Highlands to Island trail after receiving $785,000 from Pilgrim’s Pride, the largest ever corporate donation to the city. The Hall County and Gainesville trail system includes 10 miles of trails and will eventually span 54 miles from Gainesville to Braselton.

Emily S. Davenport reports that principles before profit has been 3 Porch Farm’s business model from the beginning. When the farm was just a dream, Steve and Mandy O’Shea — owners and operators of 3 Porch Farm — knew that they wanted to use their business to do as much good in the world as possible.

Hunter Riggall reports that voters chose to return Mayor Steve “Thunder” Tumlin to a fourth term in office on Election Day Tuesday when he beat Councilwoman Michelle Cooper Kelly. With 100% of precincts recording, Tumlin had received 4,981 votes, about 57%, to Kelly’s 3,733, about 43%, according to unofficial results reported by Cobb County Elections.

Thais Ackerman reports that Fulton County Elections Director Richard Barron plans to resign at the end of the year. Chairman of the County’s Board of Commissioners Robb Pitts and County Election Board Chair Cathy Woolard made the announcement in a news conference on Wednesday afternoon, stating they have received his resignation letter, just a day after the mayoral election.

Jill Nolin and Ross Williams report that state lawmakers have eased into a special session centered on drawing new district lines that throw some legislators’ political future in doubt and will significantly remake some districts. But there was little action on map-making Wednesday as lawmakers, third-party groups and others tried to make sense of the GOP plans released on the eve of the session.

Kemp reloads campaign account with an eye on Abrams and Perdue

Greg Bluestein reports that Gov. Brian Kemp is quickly building up his campaign coffers as he prepares for a potential rematch against Democrat Stacey Abrams – and the possibility of a brutal GOP primary challenge from former U.S. Sen. David Perdue. Kemp won’t face another finance disclosure requirement until early next year, but his campaign on Thursday released figures to the AJC that showed the Republican has raised more than $4 million since July 1.