Expert breaks down factors contributing to the labor shortage

Janice Yu reports, businesses big and small in the US are struggling to fill their job openings.  “We are observing a whole bunch of people who are on a break,” said Dr. Ramnath Chellappa, the Associate Dean and Academic Director of the Master of Science in Business Analytics program at Emory University’s Goizueta Business School. 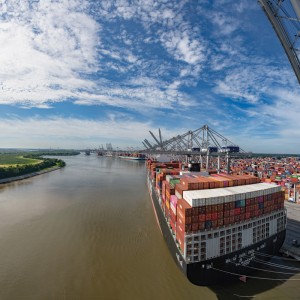 Mary Ann DeMuth reports, modern and massive, the Georgia ports run like well-oiled machines. Since the 1700s, the Savannah and Brunswick ports have played integral roles in international trade that continue to grow.

Gordon Jackson reports that the Federal Aviation Administration is delaying a decision on a proposed spaceport in Camden County, a decision it was initially scheduled to announce three years ago. The federal agency’s Record of Decision, most recently planned for Wednesday, is now scheduled for Dec. 15.

Staff reports, following a year of record impact on Georgia businesses, the Georgia Center of Innovation, a strategic arm of the Georgia Department of Economic Development (GDEcD), has refined its branding through the launch of new website assets to ensure that Georgia businesses of all sizes understand the Center’s services and benefits.

William Inman reports, for M. Brian Blake, Georgia State’s new president in just his second week on the job, convocation is his first chance to see the university’s lifeblood — its students. This group, masked-up and streaming through the Sports Arena on a sweltering August day, is an exceptional one: It’s the largest, most qualified and most diverse first-year class in Georgia State’s history.

Stanley Dunlap reports that the fate of Georgia renters waiting on emergency housing relief aid hangs in the balance as the state agency managing a $550 million program will ask the U.S. Treasury Department to sign off on a plan to get money in the hands of those who need it to avoid eviction.

Tim Darnell reports that Georgia has joined six other states in filing a long-threatened complaint against President Joe Biden and other federal agencies over the White House’s COVID vaccine mandates. Gov. Brian Kemp and Attorney General Chris Carr filed the complaint late last week in the U.S. District Court for the Southern District of Georgia.

The Jolt: It’s Election Day in Georgia. Here’s what to watch.

Patricia Murphy, Greg Bluestein and Tia Mitchell report that normally, a wide-open vote for Atlanta mayor would take center stage in the metro area on Election Day. But low early turnout, a high number of undecided voters, and major competition for attention from Game Six of the World Series could scramble the all-important race.