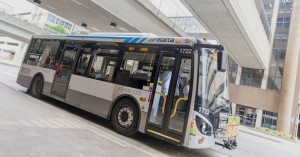 Mary Ann DeMuth reports, according to the Atlanta-Region Transit Link Authority, which works to connect transit options across the 13-county metro area, fewer than 25% of the region’s residents live within walking distance of a bus or rail station. And only 3% can walk to a location where buses or trains come at least every 15 minutes.

Kelly Yamanouchi reports that some people who work and live just south of Hartsfield-Jackson International Airport noticed a strong odor of jet fuel permeating the area and spotted clean-up crews at the Flint River. It turned out there had been a 700-gallon jet fuel spill at the airport Sept. 26. But neighbors didn’t find that out from state officials or anyone at Hartsfield-Jackson.

Joe Hotchkiss reports that Columbia County’s new Amazon delivery center opened officially Friday, with Georgia’s governor praising economic development officials for landing the retail giant. Columbia County, and really the whole area – Richmond, Columbia – the teams down here are so good to work with, and we have that state-local partnership that makes us even stronger competing with other states around the country,” Gov. Brian Kemp said before touring the five-story, 450,000-square-foot robotic fulfillment facility at White Oak Business Park between Appling and Harlem.

Curt Yeomans reports that Gwinnett County received recognition from the federal government this week for its use of COVID-19 relief funds to help people facing housing insecurity. The U.S. Treasury named Gwinnett a “top performer” in using federal stimulus funds because of its Project Reset 2.0 program, according to an announcement from county officials.

Carol Niemi reports that Danny Ross, longtime Dunwoody resident, venture capitalist, entrepreneur, inventor, community leader and member of the Dunwoody Economic Recovery Committee, has submitted to the city a 44-page proposal for a Dunwoody tech incubator, a plan that was turned down when he first proposed it in 2012.

Mary Landers reports that Federal regulators have delayed the next step in deciding if  Spaceport Camden will become a reality. The Federal Aviation Administration Office of Commercial Space Transportation announced Wednesday it now expects to issue a Record of Decision about the project by Nov. 3.

Nyamekye Daniel reports that a group of Georgia Democrats says a portal meant to increase transparency in the state’s handling of unemployment claims will exacerbate workers’ frustrations with the program and transfers the burden to lawmakers. Lawmakers are poised to participate in a pilot program that allows them access to unemployment claims, but to get access to the information, they must agree to a confidentiality agreement that Democrats say could stifle their efforts to help unemployed constituents facing benefit delays.

Graves forms PAC to support Republicans, Democrats in U.S. Congress who demonstrate the ability to work together

John Bailey reports that former 14th District Congressman Tom Graves announced Friday the launch of America’s Future, Together, an effort to support bipartisanship in Congress. Combining his former campaign committee and leadership political action committee into one, the new PAC will support Republican and Democrat incumbents who demonstrate the ability to work with those whom they may disagree with, said PAC spokesperson Tim Baker.

Patricia Murphy, Greg Bluestein and Tia Mitchell report that a proposal to display a statue of U.S. Supreme Court Justice Clarence Thomas on the statehouse grounds is gaining traction among Georgia Republicans. State Sen. Jason Anavitarte, who said it’s “only fitting and proper” to honor the Pin Point native outside the Capitol, has picked up several key co-sponsors backing his effort.