Dave Williams reports that the economic impact of the surging delta variant of COVID-19 has yet to be felt in Georgia. Tax collections in the Peach State rose by 12.7% last month compared to August of last year, the state Department of Revenue reported Wednesday. Revenues are up 6.2% for the first two months of fiscal 2022, which began July 1. 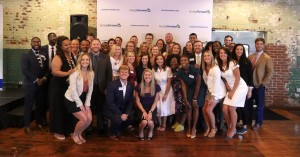 Mary Ann DeMuth reports that the nonprofit GeorgiaForward, which engages young professionals to generate ideas that will help improve communities across the state, is seeking civic-minded individuals ages 25 to 41 for its next Young Gamechangers class. More than leadership training, Young Gamechangers is an action program aimed at making a tangible impact in select communities.

Dave Williams reports that Georgia airports need $1.3 billion for projects including runway extensions and terminal improvements, Carol Comer, director of the state Department of Transportation’s Intermodal Division, said Wednesday. That need translates to $411 million a year for commercial and general aviation airports that receive only about $68 million a year in combined state and federal funding, Comer told members of a legislative study committee the General Assembly created this year to look for ways to secure enough funds to ensure growth in Georgia’s aviation industry.

J.D. Capelouto and Anjali Huynh report that the Atlanta City Council gave the green light Wednesday night to the construction of a new police and fire training center on forested land that was once home to the old Atlanta prison farm, signing off on a controversial proposal that has engulfed City Hall for weeks.

Staff reports that Governor Brian P. Kemp announced on Wednesday that bioplastics company NANTRenewables, a subsidiary of NantWorks, will invest up to $29 million to build a manufacturing facility at SeaPoint Industrial Terminal Complex in Savannah. This venture will create 134 manufacturing jobs in Chatham County.

Staff reports that Brent Scarbrough and Company will move its headquarters from Fayetteville to the Newnan-Coweta County Airport. The company is looking to fill a wide range of positions including equipment operators, truck drivers, equipment technicians and mechanics.

Andy Miller reports that the Environmental Protection Agency is proposing to add a westside Atlanta area that’s contaminated with lead to the Superfund program’s National Priorities List (NPL), which would allow more federal funding for clean-up. The Superfund program, created in 1980, has the responsibility of identifying dangerously polluted sites around the nation, cleaning them up and, when possible, holding polluters financially accountable.

Lauren McDonald reports that One Hundred Miles is continuing to monitor and oppose any attempt to eliminate seasonal limitations on dredging projects in the harbors of Savannah and Brunswick. The limitations, the environmental nonprofit says, protect sea turtles and other marine life from being harmed by hopper dredges.

Greg Bluestein reports that President Joe Biden’s allies are stepping up their efforts to defend his agenda in Georgia with a new ad campaign aimed at the Black voters who fueled the Democratic victories in November’s election and January’s Senate runoffs. The pro-Biden outside group Building Back Together on Thursday launched a digital and radio ad campaign targeting voters of color with messages touting the $3.5 trillion social policy proposal that is pending in Congress.