Sarah Rose reports that Hurricane Ida came ashore in Louisiana as a Category 4 hurricane, making it one of the most powerful in the region’s history. While the storm made landfall west of Georgia, it could have an impact at the gasoline pump here. 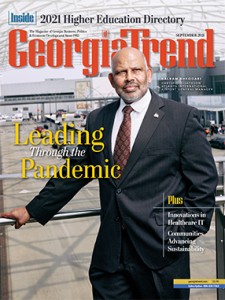 Patty Rasmussen reports, without a doubt, 2020 went down as one of the most volatile economic periods in airline industry history. But for leaders at Hartsfield-Jackson Atlanta International Airport (ATL), the focus in 2021 has been about regaining momentum as passengers – some tentatively, others enthusiastically – return to the air.

Tamar Hallerman reports, for the third time in less than five months, metro Atlanta received assurance from federal authorities that a significant portion of its water supply needs will be secure in the decades to come. The latest good news came from the U.S. Army Corps of Engineers, which in a decision dated Aug. 27 granted Georgia’s water supply request for Allatoona Lake.

David Pendered reports that the reopening Tuesday of a drug manufacturing facility in Tennessee following its purchase by metro Atlanta company advances White House objectives to increase domestic production of life-saving drugs. Jackson Healthcare, of Alpharetta, purchased USAntibiotics, based in Bristol, Tn. The company had been in bankruptcy.

Trevor Williams reports that while its “world’s busiest” moniker took a hit during the travel pandemonium that was 2020, Hartsfield-Jackson Atlanta International Airport remained the most efficient airport in the world for the 18th straight year. That’s according to the Air Transport Research Society, a consortium of academics, who during an Aug. 27 virtual meeting voted the Atlanta airport into the top spot out of more than 200 major airports worldwide.

Staff reports that a commercial real estate services firm has secured a lease with “a leading third party logistics provider” to operate in Gordon County, according to a Developers of Calhoun LLC representative. It will lease 468,000 square feet in the Union Grove Logistics Center, a 98-acre master planned park under construction at Interstate 75 and Union Grove Road.

Stanley Dunlap reports that the reversal of a Trump administration rule that rolled back waterway protections is giving environmentalists new hope that a proposed strip mine near the Okefenokee Swamp and many other development plans near stream beds will no longer skirt federal regulation. U.S. District Judge Rosemary Márquez of Arizona ruled Monday that former President Donald Trump’s decision to rewrite the federal navigable waters law poses a serious risk to the environment.

Nyamekye Daniel reports that Georgia Gov. Brian Kemp has announced a plan to spend millions of dollars to give incentives to state workers who get vaccinated against COVID-19. Kemp said Georgia would give the members of the State Health Plan and their dependents $150 gift cards or $450 in health care credits once they are fully vaccinated.

Dave Williams reports that Georgia has joined 19 other Republican-led states in suing the Biden administration over directives allowing transgender workers and students to use bathrooms and locker rooms and join sports teams matching their gender identity. The lawsuit, filed Monday in Tennessee, accuses the Equal Employment Opportunity Commission and U.S. Department of Education of issuing guidance in June that improperly expanded the scope of a U.S. Supreme Court ruling last year.

Greg Bluestein reports that former U.S. Sen. Kelly Loeffler’s conservative voter mobilization group aims to capitalize on the surge of growth in Atlanta’s northern exurbs and beyond with a new effort to register and energize residents in a five-county stretch. The Greater Georgia group kicked off a “Red Belt Blitz” in Bartow, Cherokee, Floyd, Forsyth and Hall counties, a six-figure initiative that’s part of broader goal to motivate 100,000 additional conservative voters ahead of the 2022 election.