Nyamekye Daniel reports that Georgia officials say the state is geared up for the accelerated timeline to boost electric vehicle sales recently ordered by President Joe Biden. Georgia has seen growth in the electric vehicle manufacturing sector with global leaders setting up facilities in the state. 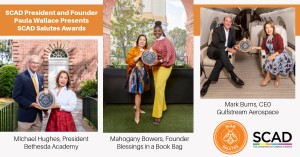 SCAD Salutes — Community Spirit Is Thriving in the Hostess City

Julia Roberts reports, founded in 1978, The Savannah College of Art and Design (SCAD) has spent over four decades preparing talented students to succeed in creative professions such as animation, architecture, graphic design, and film and television.  SCAD has shown great success in combining an innovative curriculum with the career-preparation skills which propel graduates to excel in the real world, all across the world.

Kelly Yamanouchi reports that a federal judge upheld the Paulding County Airport Authority’s decision to end its partnership with a company attempting to start commercial airline service from the Paulding County Airport. The authority had the right to end its lease deal and land agreement with Propeller Investments’ Silver Comet Terminal Partners and Silver Comet Partners because none of the company’s promised development and expansion had come to fruition, according to a decision issued Friday by Judge William Ray out of the U.S. District Court in Rome.

Dave Williams reports that Georgia’s nursing homes are looking for a share of the $4.8 billion in federal COVID-19 relief funds headed to the Peach State. The Georgia Health Care Association submitted a request Monday for $347 million from the $1.9 trillion American Rescue Plan Congress passed last spring for nursing homes, citing a significant decline in nursing home occupancy during the pandemic.

Staff reports that former State Rep. Jeff Jones plans to run for office again in 2022, but he has his sights set on the State Senate this time around. Jones, who represented District 167 (which covers parts of Glynn, McIntosh and Long counties) from 2015 to 2020, announced Monday he intends to run for the State Senate District 3 seat in the 2022 elections.

Dave Williams reports that the Stone Mountain Memorial Association took the next step Monday toward deemphasizing the Confederate symbolism that has made the park in DeKalb County a lightning rod. The association’s board adopted a new logo that depicts the southern face of the mountain away from the massive carving of three Confederate leaders.

Hunter Riggall reports that U.S. Sen. Jon Ossoff, D-Georgia, used a Monday news conference at the Aviation History and Technology Center to spotlight an effort to boost production of C-130 aircraft and upgrade existing planes. Ossoff and others have called for Congress to approve more planes for the Air National Guard and Air Reserve, citing their use for domestic purposes such as disasters and the pandemic.

House to take up voting bill amid Georgia elections investigation

Asia Ashley reports that while the Republican-controlled state elections board in Georgia is posturing to take over Fulton County elections, U.S. Rep. Terri Sewell, D-Alabama, is hoping to pass federal laws that would prevent such impositions in the future. Sewell introduced H.R. 4, the John Lewis Voting Rights Advancement Act, at a press conference Aug. 17 in Selma and plans to formally introduce the bill as the House convenes this week.

Herschel Walker registers to vote in Georgia as he weighs U.S. Senate run

Greg Bluestein reports that Herschel Walker has apparently moved back to Georgia in what could be a prelude to a run for the U.S. Senate. The former University of Georgia football star registered to vote in Georgia on Aug. 17 after decades of living in Texas, state records show.