Staff reports that Governor Brian P. Kemp applauded Georgia’s unemployment rate dropping for the fifteenth straight month to 3.7 percent for July 2021, down from 4.0 percent in June. The national unemployment rate average is 5.4 percent. 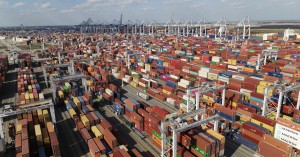 Mary Ann DeMuth reports, in case you haven’t heard, Georgia has become one of the nation’s top 10 exporting states. Among the factors behind the state’s exporting strength are the coastal jewels in our crown: the Savannah and Brunswick ports, which continue to smash their own cargo records.

Matt Kempner reports that a growing number of companies are adding a new job requirement before remote workers return to offices: full vaccinations against COVID-19. That’s not the case at Georgia’s manufacturing and poultry processing lines, where workers mostly have remained at their posts throughout the pandemic.

Jobs are available, but companies cannot find the workers to fill them

Doug Walker reports that it’s been nearly two months since Georgia cut off participation in the pandemic-related supplemental unemployment assistance program. Some pundits thought the loss of those supplemental checks might prompt workers to return to the labor market and ease a hiring crunch that has crossed all sectors of the economy.

How Delta is helping evacuate refugees from Afghanistan

Bill Liss and LaPorshe Thomas report that Delta Air Lines has committed three long-range aircraft as part of a Pentagon order for American carriers to help transport Americans and Afghan refugees from departure points outside Afghanistan to other countries.  A spokesperson for Delta told 11Alive’s Bill Liss it will add more planes if needed going forward.

Carlton Fletcher reports that barring any unforeseen glitches in the next few hours, the Lee County Commission is expected to move forward at its meeting Tuesday evening with its part of a plan that could bring broadband access to just shy of 5,000 homes in the county. And while Lee officials say that there is still a ways to go before the multimillion-dollar plan is finalized, they expressed confidence over the weekend that the gigabit service that would be provided through a partnership including Windstream, Sumter EMC, state and federal officials, and the use of local American Rescue Plan funds to provide service primarily in northern and western sectors of the county would move a step closer to fruition.

The Forum returns to Columbus

Mary Ann DeMuth reports that Columbus State University (CSU) is once again hosting The Forum, one of Georgia’s largest gatherings of business and civic leaders. The 16th annual event will be held Tuesday, Aug. 31, beginning at 9 a.m. at the historic Iron Works, home of the Columbus Convention and Trade Center.

David Pendered reports that a holistic approach to measure and respond to rising sea levels in and around Savannah is so promising that NOAA has provided new funding to expand it to other coastal communities in Georgia that need real-time flood information to help save lives from flood waters.

Andy Miller reports that as current covid onslaught may be the worst of the four virus surges in one crucial way: The effect on hospital employee morale. Leaders of Georgia hospital systems say the latest covid-19 wave has been very difficult for nurses and other clinical staff partly because it emerged at a time of wide availability of vaccines — and therefore was largely avoidable.

Dave Williams reports that the Democratic mayors of four Georgia cities are asking Gov. Brian Kemp to impose a mask mandate inside state buildings to show he is interested in the health of Georgians as well as the economy. An open letter sent to the Republican governor Friday by Atlanta Mayor Keisha Lance Bottoms, Augusta Mayor Hardie Davis, Savannah Mayor Van Johnson and Athens Mayor Kelly Girtz came one day after Kemp issued an executive order prohibiting local governments from imposing any restrictions related to COVID-19.

Patricia Murphy, Greg Bluestein and Tia Mitchell report that when U.S. Rep. Carolyn Bourdeaux flipped her Gwinnett-based seat in 2020, her victory was one of the few bright spots in a punishing election for House Democrats, who ended the cycle just a four seats away from losing control of the chamber. Now, though, the moderate is under fire from progressives for joining eight other centrists who have pledged to derail President Joe Biden’s $3.5 trillion social policy package unless a vote is first taken on the Senate-passed bipartisan infrastructure bill.