Staff reports that Governor Brian P. Kemp and First Lady Marty Kemp, in conjunction with the Georgia Department of Economic Development (GDEcD) held the official launch of the Electric Mobility and Innovation Alliance (EMIA), announcing chairs for each of the five committees. Hosted at the Governor’s Mansion, the launch included partners from the private and public sectors who will work on five committees to develop a multi-step approach that sets state objectives for Supply Chain, Infrastructure, Workforce, Innovation, and Policy/Initiatives. 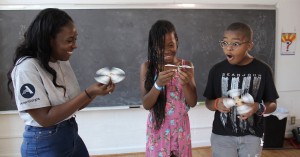 Mary Ann DeMuth reports that the Georgia Department of Community Affairs (DCA) recently announced that the federal AmeriCorps agency has provided more than $4.5 million in grants to implement programs throughout the state. Twenty-one organizations will receive the grants that will fund 565 AmeriCorps volunteers during their year of service.

Andy Peters reports that the state of Georgia paid $61 million to purchase a huge undeveloped property near Savannah that officials hope may soon become home to an automotive factory. The state and a local development authority partnered to acquire about 2,240 acres near the community of Ellabell in Bryan County from three separate sellers, according to documents obtained by The Atlanta Journal-Constitution.

Lauren McDonald reports that the Georgia Department of Natural Resources Coastal Resources Division will host a Climate Conference this week that will raise awareness of work across the state and identify opportunities to do more to address climate change. The conference is set for Thursday and Friday at the Jekyll Island Convention Center.

Grant Blankenship reports that Georgia’s Environmental Protection Division appears poised to approve a storage plan that would allow the toxic material left over from burning coal to generate electricity, so-called coal ash, to remain potentially in the path of an underground aquifer feeding the Coosa River in Northwest Georgia. The plan is a draft permit issued to Georgia Power as the company seeks to close the third coal ash pond at its Plant Hammond in Rome, which has been generating electricity since the 1950s.

David Pendered reports that residential solar power faces headwinds in Georgia and Alabama, and from the Biden administration as it argues in favor of Trump-era tariffs that have raised the price of certain solar equipment. In Georgia, the issue is a reduction in the amount of money a homeowner can receive for a new rooftop solar array, compared to the amount that’s been authorized over the past year and will continue at that rate for those homeowners.

Staff reports that an initiative from Marine Corps Installations Command is in place to bring electric vehicles onto the Marine base here, officials at the base announced. A presidential executive order came down earlier this year mandating an all-electric federal fleet. Georgia Power is helping Marine Corps Logistics Base-Albany with this effort.

Jill Nolin reports that sometime next year, Pam Wolff hopes to stop lugging heavy five-gallon jugs of clean water into her home every week so she can cook meals, brew her coffee and her grandkids can brush their teeth. Wolff says next year is probably as soon as she can expect to connect her home to a new Monroe County water line being rolled out on the county dime to give residents living in the more than 850 homes near Plant Scherer the choice of clean water.

Nyamekye Daniel reports that net tax revenue in Georgia was $2.16 billion in July, representing an $8.7 million increase compared with July 2020, Gov. Brian Kemp’s office said. Gross tax revenue in July was $2.92 billion, reflecting an increase of $187.2 million over the same time in 2020.

Hundreds turn out for GOP rally to learn about 2022 candidates

Olivia Morley reports that the Coosa Valley Fairgrounds was packed Saturday morning as hundreds from around Floyd County, the 14th Congressional District and across Georgia came together to hear from state candidates planning to run in 2022. Many people came out to hear from 14th District Rep. Marjorie Taylor Greene, but others were also drawn by big names including Gov. Brian Kemp and Agriculture Commissioner Gary Black, who wants to run against Democratic Sen. Raphael Warnock next year.

Curt Yeomans reports that U.S. Rep. Carolyn Bourdeaux, D-Ga., is leading a group of members of Congress in asking President Joe Biden and Health and Human Services Secretary Xavier Becerra to incorporate parts of a Medicaid access bill she has authored as part of a reconciliation package that is being worked on in Washington, D.C. Bourdeaux recently introduced the Medicaid Saves Lives Act to create a “Medicaid look-alike program” that the federal government would administer so Americans in states, like Georgia, that have not expanded Medicaid access could get health coverage.

Greg Bluestein reports that U.S. Senate candidate Gary Black won the endorsements of one-third of Georgia’s 159 sheriffs, giving the Republican an important network of local law enforcement support as he competes to challenge Democrat Raphael Warnock next year. The endorsements are the latest sign that the state’s Republican establishment is growing tired of waiting on Herschel Walker to decide on a run — or unconvinced he would be a strong candidate even with Donald Trump’s support.