Jill Nolin reports that the federal government is at last rolling out a loan program meant to help farmers reclaim portions of property lost when the land changed hands over generations, leaving the ownership rights unclear. The program, called the Heirs’ Property Relending Program, was included in the 2018 Farm Bill but not implemented until this year. 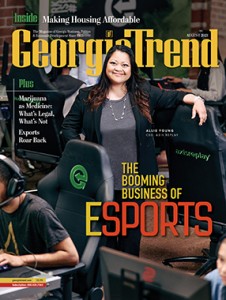 Mary Ann DeMuth reports, remember when we used to think of video games as a solitary activity or one where a few friends play together virtually for fun? Certainly those scenarios still exist, but today video games have emerged from the sidelines to become the sport of the century.

Georgia Renews Pecan Push in India; A 36 Percent Tariff Stands in the Way

Trevor Williams reports that Georgia is renewing a push to introduce the humble pecan to a potentially fertile market — India. There’s just one problem: a 36 percent tariff on imports that makes the tree nut cost prohibitive versus competitors like almonds and pistachios, which face only a 10 percent levy.

Abraham Kenmore reports, whether it is a local business seeking to expand an industrial project or state scouts bringing an employer to Georgia, major economic development projects involve close collaboration between local development authorities and the state. “Usually when one organization is notified the other is immediately brought in, because it takes a state and local effort to win these projects,” said Trip Tollison, president and CEO of the Savannah Economic Development Authority.

Larry Hobbs reports, in the wake of Friday night’s completion of the cut to separate Section 6 from the shipwrecked Golden Ray, oil hemorrhaged from the half-submerged steel hull and fouled beaches along the southern shoreline of St. Simons Island. Beginning at daylight Sunday, dozens of oil pollution workers combed the beaches from south of the St. Simons Pier to the shores near the King and Prince Hotel to the north, said U.S. Coast Guardsman Michael Himes, spokesman for Unified Command.

Georgia Medicaid insurers may have to repay $500 million

Rebecca Grapevine reports that Georgia is in line to recover $500 million from state Medicaid insurers for overpayments in 2020 and 2021, according to an insurance industry official who represents the companies. The half-billion-dollar payout will come from two separate Medicaid recoveries, said Jesse Weathington, the executive director of the Georgia Quality Healthcare Association.

Ross Williams reports that six of Lori Ann Carter’s seven children are heading back to school Monday, and the past week has been a blur of supply shopping, open houses and preparing the little ones for a new year. The seventh child is starting school a week later, and he won’t be with his siblings. That’s because a week before the first day of school, the family found out his scholarship for the Georgia Special Needs Scholarship fell by $2,000.

David Armstrong, Stephen Fowler and Sherry Liang report that throughout recent redistricting hearings held across Georgia, residents around the state have stepped forward to call for improved insight into the once-a-decade recasting of Georgia’s political boundaries and greater opportunity for public input. While Georgia’s redistricting process is inherently partisan, there are measures that experts say can be employed to make the process fair and transparent.

Dave Williams reports that Christmas is coming early this year for local governments, businesses and nonprofits in Georgia struggling to recover from the coronavirus pandemic. Starting Aug. 1, the state will be accepting applications for $4.8 billion in federal funding earmarked for Georgia in the American Rescue Plan, a $1.9 trillion COVID-19 stimulus bill Congress passed in March.

James Salzer reports that Gov. Brian Kemp didn’t wait long to try out a new Republican-backed measure he signed into law that allows him — and a few legislative leaders — to set up funds that can collect unlimited contributions from donors. Facing what will almost certainly be the most expensive gubernatorial reelection fight in Georgia history, Kemp’s campaign created the Georgians First Leadership Committee last month.