Ellen Eldridge reports, even before the COVID-19 pandemic, Georgians struggled with access to mental health care and substance use disorder treatment. The state ranks 51st in access to health care, and Lee and Haralson counties are among the top 20 counties nationwide with the highest percentages of their populations reporting frequent suicidal ideation, according to a screening done in 2020 by Mental Health America. 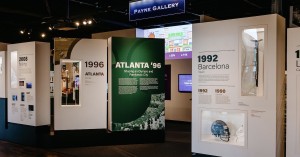 Mary Ann DeMuth reports that the 1996 Olympic and Paralympic Games were arguably a turning point for Atlanta, generating significant economic development and focusing the world’s attention on the city. On the eve of the rescheduled 2020 Tokyo Games, the Atlanta History Center is celebrating the 25th anniversary of the Atlanta Games with a variety of activities and digital explorations.

Kelly Yamanouchi reports that Travelex, already struggling because of the rise of cashless payments and hurt even more by the recent drop in international travel, has shut down its currency exchange locations at Hartsfield-Jackson airport and is transferring its contract to another company. With an increasing number of international travelers using credit cards and debit cards, foreign currency exchange businesses have faced hard times in recent years.

When construction could begin on Inland Port

Conner Evans reports that the Georgia Ports Authority will move forward with plans to construct the Northeast Georgia Inland Port, with the hope of being operational by the end of 2024. Construction is expected to start in the summer of 2022.

Andy Miller reports that a Charlotte-based health care system has finalized a deal to acquire a nonprofit hospital organization based in Rome. Floyd Medical Center, a hospital in Cedartown and one in Alabama will now become part of Atrium Health under the long-delayed agreement, announced Wednesday.

Rome to keep MSA status as feds move away from 100,000 population proposal

Staff reports that Rome and Floyd County will keep the Standard Metropolitan Statistical Area designation, a U.S. Office of Management and Budget release stated. The designation, which dictates the allocation of over a half a million dollars in federal funding, had appeared to be in jeopardy because Rome and Floyd County’s population fell just under a proposed 100,000 threshold unveiled earlier this year.

Robin Kemp reports that the Clayton County Office of Elections and Registration is having to return about $600,000 in grant money because, according to member Pat Pullar, the county has dragged its feet on finding a suitable space for the office to relocate. The Clayton Crescent is working to clarify the exact amount and the source of the funds that had to be returned.

Dave Williams reports that Georgia’s two U.S. senators are pushing legislation to let Georgia and 11 other states that have not expanded Medicaid coverage through the Affordable Care Act do so through a new “look-alike” federal program. Democrats Raphael Warnock and Jon Ossoff introduced the Medicaid Saves Live Act this week to extend Medicaid to up to 4 million low-income Americans who earn too much to qualify for traditional Medicaid but not enough to buy coverage on the private market.

Maya T. Prabhu reports that Donald Trump says he will not “support or endorse” Butch Miller’s candidacy to be Georgia’s next lieutenant governor. The former president sent a press release late Wednesday saying Miller, currently the Senate president pro tem, refused “to work with other Republican Senators on voter fraud and irregularities in the state.”