Lauren McDonald reports that nesting season for loggerhead sea turtles is in full swing, and the number of nests on Georgia’s beaches this summer indicate a continued recovery of the at-risk population. Mark Dodd, a senior wildlife biologist with the Georgia Department of Natural Resources who coordinates sea turtle conservation efforts in the state, said Thursday that while nesting numbers are above average this summer, the approximately 1,630 nests found and recorded so far are below what’s been seen in recent years when nesting has taken place at high rates. 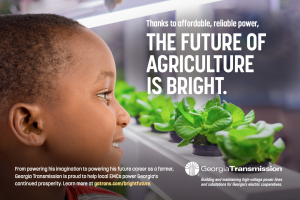 Julia Roberts reports that agriculture is Georgia’s oldest and largest industry, with one in seven Georgians working in forestry, agriculture or related fields, according to the Georgia Farm Bureau. This crucial industry depends on consistent, reliable energy from the state’s electric membership cooperatives (EMCs) and Georgia Transmission.

Ernie Suggs reports that Tom Houck, who spent his younger days chauffeuring Martin Luther King Jr. around town, is getting back behind the wheel — figuratively. Fifteen months after the raconteur shut down his Civil Rights Tours Atlanta because of the pandemic, he is set to reopen this weekend.

Trevor Williams reports, from its beginnings a few years back, Atlanta’s Fintech South conference has played host to Israeli firms as part of its international section. It makes sense, then, that the “start-up nation” was even better represented this year,  when all that was required to join was an Internet connection.

Sarah Freeman reports, it is with sadness that we announce the death of Celestia “Lessie” Bailey Smithgall (ABJ ’33), an alumna who played a pivotal role in the creation of the Peabody Awards. Smithgall celebrated her 110th birthday in April and died at her home on June 25 in Gainesville, Georgia.

Ellen Eldridge reports, after a successful campaign, the Georgia Council on Substance Abuse plans to use federal grant money to bring back billboards showing the faces of people in recovery from drug and alcohol addiction. While the traditional 12-step program touts anonymity, the billboard campaign screams out against stigma.

Ross Williams reports that when Georgia lawmakers sit down to draw the state’s new Congressional and legislative borders this fall, they should remember the Latino population in the north of the state, says Jose Morales of Whitfield County. “The carpet industry alone employs over 30,000 people in Whitfield County, and the majority of those are migrant workers, specifically Latino workers,” Morales said.

Dave Williams reports that Georgia citizens want new congressional and legislative district maps that are fair, transparent and drawn without regard to politics. One after another, they said so during the first four of 11 public hearings the General Assembly is holding across the state this summer to tee up the once-a-decade process of adjusting district lines to reflect shifts in population during the previous 10 years.

Trump sees Walker as ‘unstoppable’ candidate, but many in GOP are wary

Greg Bluestein reports that Herschel Walker hasn’t lived in Georgia for decades. He’s never held public office, doesn’t attend the sort of Republican events that are mainstays on the political calendar and has bypassed the backslapping fundraising circuit that helps decide winners and losers in the state’s premier races.