Staff reports that on Wednesday, Governor Brian P. Kemp announced that Pregis, a leading manufacturer of protective packaging, will expand its presence in Georgia and plans to invest more than $14 million to open an advanced manufacturing facility in Henry County. This will immediately create 80 additional jobs in the region and ramp up to 150 opportunities as the operation scales over the next few years. 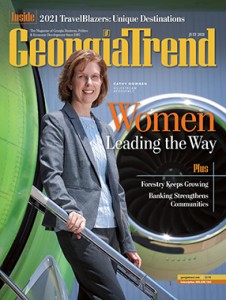 Patty Rasmussen reports, women are leading Georgia businesses in record numbers, from ascending to the C-suite to building their own companies to taking the torch from previous generations of family-owned companies. According to the National Women’s Business Council (NWBC), an estimated 42% of all U.S. businesses (nearly 13 million) were women-owned in 2019, and that number is growing.

Feds to give $46.9 million for inland port in Gainesville

Michael E. Kanell reports that the U.S. Department of Transportation plans to give the Georgia Ports Authority $46.9 million to build an inland container port at a 104-acre site near I-985 in Gainesville. The federal cash infusion could give momentum to a state project first announced in late 2018 aimed at improving access to Savannah’s booming harbor hundreds of miles away and reducing congestion through metro Atlanta.

Abraham Kenmore reports that Savannah / Hilton Head  International Airport will receive a $6 million discretionary grant from the Department of Transportation. The grant will be used to construct an apron for a new cargo building, according to Lori Lynah, director of marketing and air service development.

Maria Saporta reports that the High Museum of Art has received one of the largest foundation grants in its history with a $3.1 million grant from the Sara Giles Moore Foundation to conserve and care for the Museum’s art collections. The grant will support a complete assessment of the Museum’s care needs and will fund necessary treatment of its artworks.

Nyamekye Daniel reports that new laws that will cut income taxes for Georgians and increase tax incentives for businesses go into effect Thursday with the start of a new fiscal year. Dubbed the Tax Relief Act of 2021, House Bill 593, raises the standard deduction on state income tax returns for a single taxpayer by $800 to $5,400 and by $1,100 to $7,100 for a married couple filing a joint return, starting in the 2022 tax year.

Dave Williams reports that undeveloped interstate highway rights of way could be used to house solar panels, broadband projects and electric-vehicle charging stations under legislation being introduced by U.S. Sen. Jon Ossoff. The Sustainable Highways Innovation Act is modeled after The Ray, an 18-mile stretch of Interstate 85 in LaGrange used to test clean energy technologies, Ossoff, D-Ga., said Wednesday during a news conference held beside a solar array at the site.

Greg Bluestein reports, Gov. Brian Kemp is flexing his financial muscles ahead of a challenging re-election campaign. The Republican will report raising roughly $12 million so far this cycle for his bid for a second term, with about $9 million in cash on hand a year out from the primaries.