Clay Neely reports that Wednesday evening, President Joe Biden declared a state of emergency for Georgia and ordered federal assistance to supplement state and local recovery efforts to areas affected by the tornado that swept through the state on March 25 and 26. 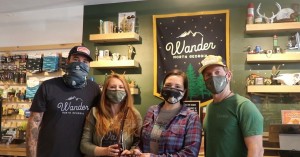 Mary Ann DeMuth reports, more than one million small businesses in Georgia help keep our state economy going strong. They make up 99.8% of all companies located here and employ 1.6 million workers. In celebration of Small Business Week, May 3-8, the Georgia Department of Economic Development (GDEcD) has announced its 2021 Small Business ROCK STARS.

Andy Peters reports that Georgia has hired a British real estate company to bargain for better deals on its behalf for the hundreds of buildings the state leases. The State Properties Commission last week hired Savills to manage about 1,200 leases covering more than 12 million square feet, according to the contract.

Staff reports that the Georgia Department of Economic Development (GDEcD) today announced that Ammeraal Beltech, a member of the Ammega Group and a leading global manufacturer of lightweight conveyor belting, will invest more than $19 million in opening a new production plant in Buford, Georgia. The company’s expansion to Buford will create 83 jobs in Hall County.

Riley Bunch reports, when Sylvester Bembry inherited the family farm in Hawkinsville from his parents, he inherited the debt that came with it. Debt that he doesn’t want to pass on to the next generation. “All we can do is pray about it,” he said. “And hopefully it will work out.”

Staff reports that Governor Kemp signed SB 6 to incentivize job growth and economic development across the Peach State. “Despite an unprecedented global pandemic, Georgia continues to create jobs, spur investment, and create economic development in every corner of our state,” said Governor Kemp. “Senate Bill 6 is the logical next step in our efforts to support businesses producing life-saving medical devices and supplies here in the Peach State.

David Allison reports that an Atlanta trucking company in expansion mode says it’s willing to pay drivers almost $100,000 a year, further proof that the economy is shifting into high gear. Johns Creek-based SAIA Inc. said May 4 it wants to hire and develop over 500 Class A commercial driver’s license drivers and 300 dockworkers throughout the next several weeks.

Lauren McDonald reports that One Hundred Miles is taking legal action with the hope of preventing a summer dredging project in St. Simons Sound because of the potential harm it would pose to nesting sea turtles. The environmental advocacy nonprofit, represented by the Southern Environmental Law Center, filed a legal challenge and motion for preliminary injunction Monday against a plan by the U.S. Corps of Engineers to eliminate seasonal dredging windows.

Nyamekye Daniel reports that state workers will have three weeks of paid parental leave under a bill signed into law Wednesday by Georgia Gov. Brian Kemp. Under House Bill 146, state government or local school board employees who worked at least 700 hours over the six months preceding the requested paid leave date can qualify for the paid time off after the birth of a child, adoption of a child or taking in of a foster child.

Beau Evans reports that Gov. Brian Kemp signed legislation Wednesday allowing restaurants to sell curbside takeaway alcoholic beverages and distillers to sell liquor on their premises in Georgia. The loosened rules on alcohol sales aim to give Georgia restaurants and alcohol vendors a boost after more than a year of weathering financial losses spurred by the COVID-19 pandemic, which industry representatives estimate has wiped out roughly 20% of Georgia’s restaurants.

Georgia earmark proposals near $100M despite few requests from Republicans

Tia Mitchell reports that eight members of Georgia’s U.S. House delegation, including all six Democrats, have collectively submitted requests for almost $97 million through a process called earmarking to fund projects ranging from public safety communications in the tiny town of Pelham to a “deck park” that would span across Atlanta’s Downtown Connector.