Vanessa Romo reports that this summer’s Major League Baseball Draft and the All-Star Game won’t be held in Atlanta, MLB officials announced Friday. The withdrawal of the two events from the city in July is in response to Georgia’s recently enacted voting restrictions, which critics, including President Biden, have denounced as “Jim Crow in the 21st century” because they say the legislation will disproportionately affect communities of color. 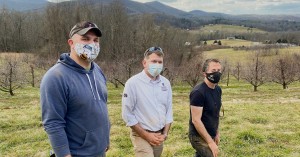 Mary Ann DeMuth reports, here’s one for the “did you know?” category: our state was once a major national player in apple production. In fact, it can be argued that Habersham County in the scenic northeast used to produce more apples per capita than any other part of the country, according to the University of Georgia (UGA) College of Agricultural and Environmental Sciences.

Report: Kia plant to cancel 2 days of production this week

Bill Torpy reports that Kia Motors announced it will stop production at its assembly facility in West Point for a couple of days this week because of supply-chain issues. The company, according to a report in Reuters, said the pause will “allow time for the supply chain to stabilize for continuous operation throughout the remainder of the month.”

Columbia County’s 2020 was a major year of growth

Joe Hotchkiss reports, like a teenager after a summer growth spurt, Columbia County might not be recognizable to returning Masters Tournament visitors. During the past 12 months, though COVID-19 exacted a heavy economic toll nationwide, one of the world’s biggest retailers and the Army were helping write landmark chapters in the county’s history regarding growth.

Robin Kemp reports that Jonesboro-based Heritage Southeast Bancorporation, Inc. and Heritage Southeast Bank have signed “a definitive purchase and assumption agreement” with VyStar Credit Union. The $1.5 billion, all-cash deal, expected to close before the end of this year, will make VyStar the nation’s thirteenth-largest credit union, in terms of assets, at an estimated $12 billion.

Andy Miller reports that five years ago, Marietta-based Wellstar Health System bought five Georgia hospitals from Tenet Healthcare. The prize of the lot was seen to be North Fulton Hospital in suburban Roswell, not far from Wellstar’s hub.

Nick Corasaniti reports that Gov. Brian Kemp of Georgia on Saturday issued a blistering critique of Major League Baseball’s decision to pull its All-Star Game out of the state over the new law there restricting voting, arguing that the move would deliver an economic hit to Georgians.

Nyamekye Daniel reports that a bill to increase state funding for Georgia charter schools was passed by the General Assembly and awaits approval by Gov. Brian Kemp. Senate Bill 59 increases charter school allocations by about $100 per student.

Staff reports that Jon Ossoff’s new legislative director is one of only five Black people to hold that position among the 100 U.S. Senate offices. Overall, 66% of Ossoff’s top office staff members are people of color, compared to 11% overall in the Senate, his office said.