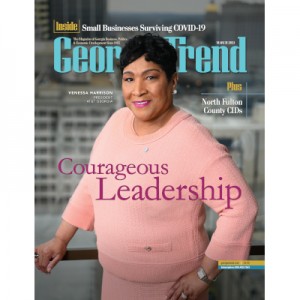 On a Mission: Q&A with Venessa Harrison, AT&T Georgia president

Susan Percy reports that Venessa Harrison’s journey with AT&T started more than 30 years ago, when she was hired as a telephone operator in North Carolina. She rose through the ranks to become president of AT&T North Carolina, then came to Georgia in 2018 to head the company’s operations here.

Matt Kempner reports that the pandemic has both hurt and helped the fortunes of some of Georgia’s biggest businesses — sometimes within the same company. Sandy Springs-based Newell Brands, with well-known brands such as Rubbermaid, Elmer’s glue, Coleman and Mr. Coffee, had been approaching nearly $10 billion in annual sales.

Macon’s 2021 Cherry Blossom Festival is a go during COVID. Hear’s how businesses feel.

Jenna Eason reports that the 39th International Cherry Blossom Festival is planned for March 19-28, and downtown businesses are preparing for an influx in customers. In years prior to the coronavirus pandemic, the festival has had a $10 million-$12 million annual economic impact from a variety of factors including taxes, hotel rooms, food and shopping, according to a University of Georgia study.

MJ Kneiser reports that poultry producer Pilgrim’s Pride Corporation said today they plan to build a $70-million rendering plant in Carnesville. The new plant will create 90 permanent, good-paying jobs in Franklin County, as well as 100 construction and trades jobs during development of the facility, according to the press release.

Lauren McDonald reports that Coastal Georgians seeking better protections for the critically endangered North Atlantic right whale have a couple more days to make their voices heard by federal officials. The National Oceanic and Atmospheric Administration has proposed changes to the laws that regulate how lobster and crab fisheries are permitted to negatively impact the right whales that feed and migrate along the East Coast.

Andy Miller reports that two Middle Georgia health systems have called off their proposed combination, saying the COVID pandemic played a major role in the breakup. Atrium Health Navicent, in Macon,  and Houston Healthcare, based in Warner Robins, announced Thursday that they “mutually agreed’’ to stop pursuing the deal.

Gambling Legislation On The Ropes At The State Capitol

Rahul Bali reports that a House bill to allow online sports betting in Georgia, along with other gambling bills, could be in jeopardy as House Democrats threaten to pull support. Talking to reporters in the State Capitol on Friday, House Minority Caucus Chairman Billy Mitchell said there are specific concerns about House Bill 531 over minority participation.

Curt Yeomans reports that the underlying message that came out of Solicitor General Brian Whiteside’s office on Friday afternoon is that he will fight the state of Georgia in court if a controversial omnibus elections reform bill, House Bill 531, pending in the Georgia House of Representatives becomes law.

Nyamekye Daniel reports that the Georgia Senate has approved a bill that makes it easier for Georgians on probation to seek early termination of their sentence. Senate Bill 105 would simplify the process for early termination for people who have served at least three years on probation and met certain requirements. It cleared the Senate unanimously Thursday.

Beau Evans reports that a bill to create new fundraising committees for political campaigns in Georgia that critics say could increase the influence of “dark money” passed in the state Senate on Friday. Sponsored by state Sen. Jeff Mullis, R-Chickamauga, the bill would create so-called “leadership committees” run by the governor, lieutenant governor and their opponents – plus top leaders in the General Assembly – to collect campaign donations ahead of statewide and legislative elections.

Greg Bluestein reports that Democrat Marcus Flowers knows the odds are against his bid to unseat Republican U.S. Rep. Marjorie Taylor Greene in her ruby-red northwest Georgia district. But he made clear in the rollout of his congressional campaign that he’s faced plenty of harrowing challenges before.