Dave Williams reports that first-time unemployment claims in Georgia continued to decline last week, as the state Department of Labor worked to implement system changes allowing benefits authorized by legislation Congress passed in December. Additional requirements in the bill must be integrated into labor department systems before eligible payments can be released. 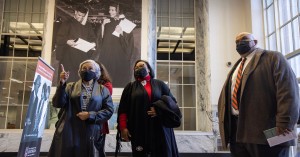 Mary Ann DeMuth reports that February is Black History Month, the annual recognition of African Americans’ achievements and their role in U.S. history. The celebration dates back to 1915, 50 years after the 13th Amendment to the U.S. Constitution abolished slavery

Bakery plant to close in southwest Atlanta after nearly 40 years

Aungelique Proctor reports that more than 400 jobs will be lost when the Mondelez International Nabisco manufacturing plant closes its doors this summer. The news came Thursday afternoon when the company gathered its employees under a huge tent in the company parking lot after 80 years of operation.

Maria Saporta reports that the $17 million gift from the Arthur M. Blank Family Foundation to the National Center for Civil and Human Rights is part of a $50 million capital campaign to expand the Center’s offerings. Jill Savitt, president and CEO of the Center, said during a press briefing Thursday afternoon the $50 million capital campaign is currently in a quiet phase.

How the pandemic affected Aflac’s sales in 2020

Grace Donnelly reports that the Covid-19 pandemic made selling insurance a challenge. For Columbus, Ga.-based insurance giant Aflac Inc. (NYSE: AFL), sales in the U.S. dropped by more than 27% in the fourth quarter of 2020 to $388 million, compared to $534 million during the same period in 2019.

Trevor Williams reports that as a final decision looms, one of South Korea’s top government officials has called for a resolution to a dispute that could stymie Georgia’s largest-ever foreign investment. SK Innovation is plowing ahead with its $2.6 billion electric-vehicle battery complex in Commerce, Ga., despite its ongoing legal dispute with LG Energy Solutions, formerly LG Chem, which alleges SK stole its trade secrets.

Beau Evans reports that hospitals and nursing homes would have to allow in-person family visits during public-health emergencies like the COVID-19 pandemic under a bill filed in the General Assembly. The bill, sponsored by state Rep. Ed Setzler, R-Acworth, would prohibit Georgia hospitals and nursing homes from limiting patients’ ability to visit with family members in the event treatment or hospitalization lasts more than 24 hours – including during any “declared public health emergency.”

Staff reports that legislation blocking boys from playing in girls’ sports in Georgia and giving athletes cause to sue in court over violating that ban is up for debate in the General Assembly, sparking outrage from transgender rights groups. The bill, sponsored by state Rep. Phillip Singleton, R-Sharpsburg, the bill would prevent “biological males” from playing in school sports with “biological females,” halting children of different sexes or gender identities from playing in the same leagues.

Stanley Dunlap reports that a new state legislative committee focused on election changes passed a bill Thursday that will keep Georgia voters from requesting absentee ballots the week before Election Day. House Bill 270 would set a deadline of at least 10 days before Election Day for election workers to issue absentee ballots instead of the Friday before as allowed now.

Nyamekye Daniel reports that Georgia Senate budget writers presented their recommended changes to the state’s spending plan for the rest of fiscal year 2021 on Thursday. The Senate Appropriations Committee unanimously approved the proposed Amended Fiscal Year (AFY) budget, which redirects $11 million in bond financing for the Georgia Department of Public Health, $150,000 for nursing staff and $7.5 million for the governor’s emergency fund.

Greg Bluestein reports that Georgia’s election season is hardly a month in the rearview mirror, but already the battle lines are being drawn for a full slate of statewide elections and another bruising fight for the U.S. Senate. Gov. Brian Kemp is preparing for a reelection campaign with his head on a swivel.